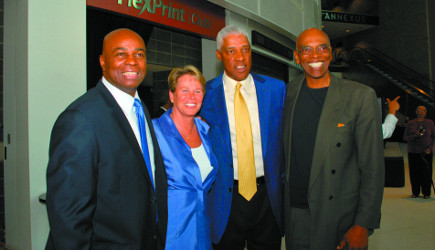 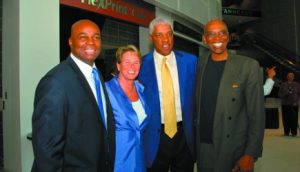 Before there was Air, there was the Doctor. On May 9, Dr. J., Julius Erving made a house call to Phoenix, for  the multi- chamber and organizational mixer sponsored by the Greater Phoenix Black Chamber of Commerce. NBA legend Erving was known for his eagle like soaring dunks way before Air Jordan came into the vocabulary.

Held at U.S. Airways Center Pavilion, the proceeds from the event benefited Teleos Preparatory Academy, a faith based school located on the campus of Pilgrim Rest Baptist Church in Phoenix.

Members of several business organizations attended the event to hear and meet NBA Hall of Famer Julius Erving. After retiring from basketball over 25 years ago, Erving has had a successful business career. In the audience were Dr. J’s former teammates Brian Taylor, Earl “The Twirl” Cureton and formidable foe,  Joe “Jumpin Joe” Caldwell.

Caldwell, a former ASU basketball standout was ostracized by the pros after he advocated for players to receive their fair share of basketball revenues. After 11 years in the NBA and ABA, “The Curt Flood” of basketball was banned from basketball. “Joe was the one that guarded me the best,” said Erving.

Erving also noted Caldwell had been blackballed by the league for standing up for his convictions. Players today are reaping the benefits of his long fight for economic reciprocity.

Earl Cureton, an assistant coach with the Phoenix Mercury, played 12 years in the NBA.

Taylor is the executive director of Teleos, a graduate of Princeton University and he played ten years in the NBA & ABA. After retiring from basketball, an education advocate, Taylor has been a successful businessman and education  administrator.

Dr. J was introduced by his long time friend, a basketball Hall of Famer in her own right, Ann Meyers-Drysdale, vice president of the Phoenix Suns and the Phoenix Mercury.

Erving noted the importance of education. A good student-athlete in college he acknowledges a sound educational foundation is key to success in any area.

The GPBCC focuses on five points of operation or “pillars”, according to Kerwin Brown, president and CEO of the group, advocacy, business development, entrepreneur training, contracting, access to capital.

The mission of the Greater Phoenix Black Chamber of Commerce is to improve the economic development of  our business entrepreneurs and the communities for which we serve. The organization serves as the cornerstone for educational training, resource programs, resources and economic growth opportunities with a specific emphasis on “Business in Action.”

Study: Five Percent of Consumers Had Errors on Their Credit Reports, Results in Less Favorable Terms for Loans