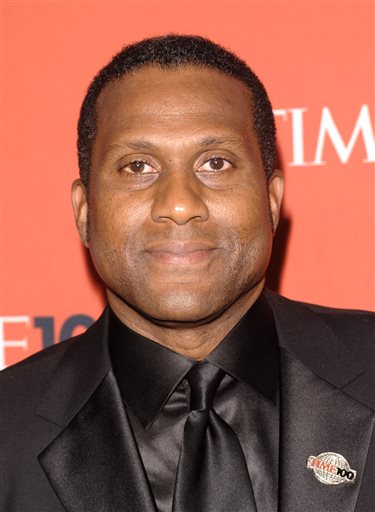 In this May 5, 2009 file photo, Talk show host Tavis Smiley attends the Time 100 Gala, a celebration of TIME Magazine’s 100 most influential people in the world, in New York. (AP Photo/Evan Agostini, file)

NEW YORK (AP) — Three years ago, guest speaker Mindy Kaling joked that publishing’s annual national convention, BookExpo America, resembled “a high school reunion where all the jocks were killed in a plane crash, and all the minorities, too.”

Little seems to have changed.

From Wednesday to Saturday, tens of thousands of publishers, authors, agents and librarians will meet at the Jacob K. Javits Center in New York for a convention predominantly organized by whites, spotlighting books predominantly written, edited and published by whites.

Non-whites are virtually absent from BookExpo planning committees and prime promotional slots. Tavis Smiley is the only non-white among the 16 scheduled breakfast and author tea speakers, who also include Jodi Picoult, Lena Dunham and Anjelica Huston. There is little non-white representation for various other high-profile events, from “Buzz” forums for upcoming adult, young adult and middle grade releases to an all-white panel that will discuss discrepancies between how men and women fiction writers are treated.

“I don’t have a good answer for you,” said BookExpo event director Steven Rosato, who noted that publishers submit candidates for panels and other gatherings. “Clearly, there’s a gap between the industry and what’s representative of the country.”

Diversity in publishing has been in the news often in recent weeks. A study from a University of Wisconsin-based commission reported that just a tiny percentage of children’s books last year featured non-white characters, and an essay by Pulitzer Prize winning fiction writer Junot Diaz, published in The New Yorker, attacked the “unbearable too-whiteness” of creative writing classes.

“That this actually happened says almost everything you need to know about where the publishing industry is at with its ‘diversity issues,'” Diaz told The Associated Press. “You only need to look at the abysmally low number of kids’ books by people of color that the industry publishes to sense that the problem is deeper than BookExpo.”

The book world has long struggled to advance from diversity panels to actual diversity, operating under a contradiction between its liberal, pluralistic ideals and the narrow range of its own population, especially in positions of power. Non-whites are absent, or close to it, on executive boards throughout, from the Association of American Publishers (AAP) to the American Booksellers Association (ABA) to the Association of Authors’ Representatives (AAR). Overall, the industry has few prominent non-white publishers, editors, agents, booksellers or book critics.

At Hachette Book Group, CEO Michael Pietsch said diversity is an ongoing mission that has been difficult to fulfill.

“It’s been a great frustration,” Pietsch said. “We work hard at attracting diverse candidates, at all levels.”

Publishing officials and critics of the business cite a variety of reasons for the small number of non-whites, from the low pay that makes it challenging to recruit young people to an entrenched industry culture comfortable with what it knows. Gail Hochman, president of AAR, said her association sponsors an intern event and attendees “seem to me to come from all sorts of backgrounds.”

“If they wanted to pursue a job, I would think that some of them will get a job in publishing,” Hochman wrote in a recent email to the AP. “I do not see that the balance of diversity in publishing jobs matches balance in the basic community we live in — but I do not see barriers to offering jobs to various types of people.”

Nora de Hoyos Comstock, who runs a national Latino book club and international Latino social network (Las Comadres Para Las Americas) that the publishers association helps support, says she knows of many Latinos who are anxious to join the industry, but cannot. She said she agreed with Hochman’s comments, to a point.

“Maybe there are no perceived barriers to offering jobs,” Comstock said in an email. “But it is a similar argument to that being made before the courts today. Judge (Sonia) Sotomayor said it best in the response to the affirmative action ban — race matters.”

The marketplace has also worked against nonwhites as many African-American and Spanish-language bookstores closed over the past 20 years because of superstore and online competition. Oren Teicher, CEO of the booksellers association, acknowledged there are few non-white booksellers among independents and that communities served by member stores are “likely more Caucasian.” He said the association in recent years has tried to recruit more non-white members, but the results were disappointing.

“It’s absolutely something we could be working harder at,” Teicher said. “But it has been a struggle.”

“Clearly any attempt at a fix will have to confront a multitude of formidable structural challenges,” Diaz said, “but that means that the structural commitment to diversity has to be equally as formidable.”

From Black Wall Street to the Black Dollar Project

New Report: Blacks are ‘Beyond Broke’