Cleveland, on the Brink
Advertisement 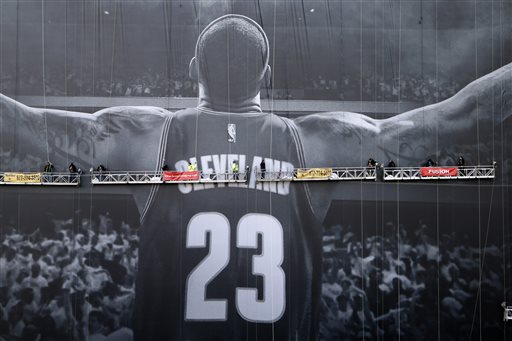 Demonstrators block Public Square Tuesday, Nov. 25, 2014, in Cleveland, during a protest over the weekend police shooting of Tamir Rice. The 12-year-old was fatally shot by a Cleveland police officer Saturday after he reportedly pulled a replica gun at the city park. (AP Photo/Tony Dejak)

CLEVELAND (The New Republic) — Before last week, the last time I’d been home to Cleveland, Ohio was in December of 2014. When I drove into town, I didn’t head to the East Side, where I grew up, and I postponed meeting up with my father downtown before we headed to Quicken Loans Arena for that night’sCavaliers game. I didn’t even tell him where I was going. Instead I made a beeline for Cudell Commons on the West Side, where a pair of police cruiser tire tracks, three weeks old, were frozen into the park’s muddy grass. Steps in front of where they ended, a grey stone park table sat adorned with toys, ballcaps, a hula-hoop, and a sports jersey—a beautiful memorial for a dead child. A small black frame in the center of the table read, in stickered letters under the glass: “Tamir Rice / You Are Black Gold.”

A few days earlier that December, the Department of Justice demanded the city reform its abusive, unconstitutional policing tactics. Mayor Frank Jackson handed the investigation into Tamir Rice’s death over to the Cuyahoga County sheriff’s office just after New Year’s Day. It took more than five months for that sheriff, Clifford Pinkney, to provide a single public update on the investigation into the two officers involved. It is still ongoing. Not a day after the sheriff spoke did we learn that the slain 12-year-old’s body—preserved all this time in case investigators needed another look—had finally been cremated.

Last Saturday, six months to the day after Tamir’s death, I was in Cleveland again. I’d come home to give an awards ceremony speech a couple days earlier at my high school to a group of young black men and boys, grades 3 through 12. I talked about how they find themselves fighting a reputation they never earned, many of them regarded as “endangered species” and “at risk” through no fault of their own. Those descriptions, I told them, could lead them to believe in the scarcity of black excellence. “We are abundant and plentiful,” I said, gesturing at the stage of young black scholars behind me and to the audience in front of me. “Don’t let anyone tell you different.” I mentioned to them that I’d written about Tamir, but given how young some of the students were, I didn’t really tell them how much I fear for them.

I thought about them as I sat with my father watching television that Saturday morning, watching Judge John O’Donnell maundering about in legalese for a good half hour until he arrived at his sadly predictable conclusion: Michael Brelo, a Cleveland police officer who shot two unarmed black suspects in 2012, was  “not guilty.”

Ferguson Protesters Disagree over Who Should Receive Donations