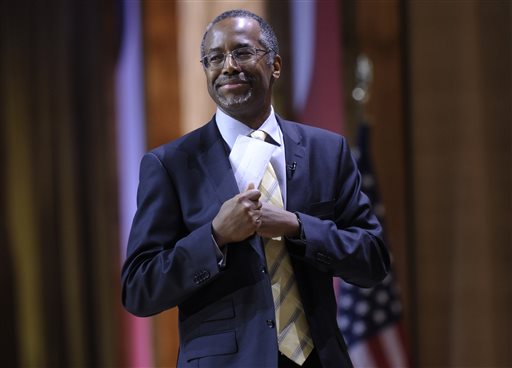 In this March 8, 2014 file photo, Dr. Ben Carson puts his notes back in his pocket after speaking at the Conservative Political Action Committee annual conference in National Harbor, Md. (AP Photo/Susan Walsh, File)

“Well, maybe I’m not objective when it comes to Planned Parenthood. But you know, I know who Margaret Sanger is, and I know that she believed in eugenics, and that she was not particularly enamored with black people. And one of the reasons that you find most of their clinics in black neighborhoods is so that you can find way to control that population. And I think people should go back and read about Margaret Sanger, who founded this place — a woman who Hillary Clinton by the way says she admires. Look and see what many people in Nazi Germany thought about her.”

(The Washington Post) – We have delved before into the question of birth-control pioneer Margaret Sanger, eugenics and her attitude about African-Americans, during the 2012 election season when Herman Cain made similar remarks suggesting Planned Parenthood targets blacks. The 2011 fact check came under attack for allegedly sugarcoating Sanger’s record, in particular for some language on her paternalistic view of blacks that we later acknowledged was a “poor choice of words.”

Carson’s remarks are less inflammatory than Cain’s, but the implication is similar: The claim is that Sanger (1879-1966), who founded what is now Planned Parenthood, was racist and Planned Parenthood thus has a deliberate policy of trying to “control” the black population by placing “most of their clinics in black neighborhoods.” Carson, a neurosurgeon, also added a Nazi connection: “Look and see what many people in Nazi Germany thought about her.”