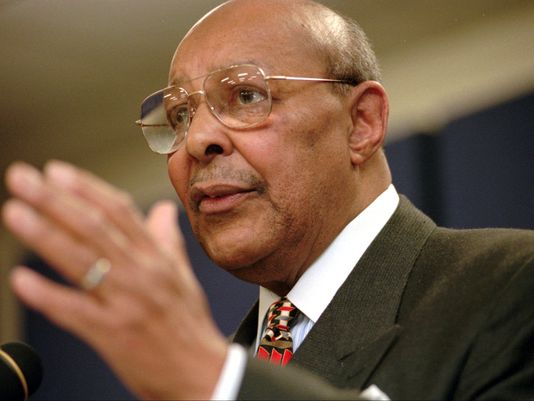 Rep. Louis Stokes, D-Ohio, announces Saturday, Jan. 17, 1998, at the Carl B. Stokes Social Services Mall in Cleveland that he will retire from Congress at the end of the year. Stokes, who served 15 consecutive terms in the U.S. House of Representatives, died Tuesday, Aug. 18, 2015, at the age of 90. (Tony Dejak/AP Photo)

CLEVELAND (USA Today) — Louis Stokes, the first African-American member of Congress from the state of Ohio, died late Tuesday at the age of 90.

His family released the following statement:

“Our family is mourning the loss of our husband, father, grandfather and close confidant. He died peacefully with Jay, his wife of 55 years, at his side. During his illness, he confronted it as he did life — with bravery and strength. He was always guided by faith, while embracing the prayers and well wishes of family, friends and constituents.

“We are grateful for the cards, prayers and words of comfort during this difficult time. He loved Cleveland and was honored to have the opportunity to represent its citizens in the United States Congress. He was equally committed to our family, and his love knew no bounds. It is this enduring love that will sustain us in the days and years to come.”

On July 20, his media representative released a statement that Stokes, who served the 21st and 11th Districts of Ohio for 30 years, had recently been diagnosed with lung and brain cancer.