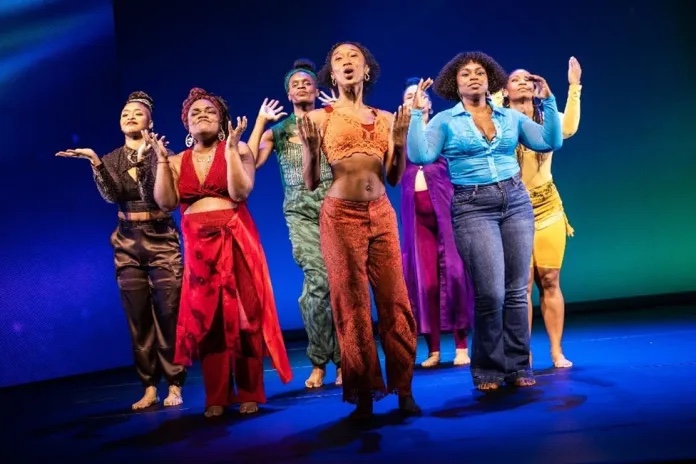 Ntozake Shange’s groundbreaking for colored girls who have considered suicide/ when the rainbow is enuf revival cast. (Photo: Booth Theater)

NEW YORK, NY — The critically acclaimed and reimagined revival of Ntozake Shange’s groundbreaking for colored girls who have considered suicide/when the rainbow is enuf will host “100 Women of Hip Hop Sisterhood Sunday,” a spirited gathering of Black women May 22 at 3 p.m. Double Tony nominee Camille A. Brown, the first person to receive a Tony nod for Best Direction of a Play and Best Choreography for this production, will be interviewed by New York City’s 94.7 The Block Afternoon Host Shelley Wade in a talkback immediately following the matinee. The event will come on the heels of “Brothers for colored girls…,” a convening of Black men in support of the show on Saturday at 2 p.m. for colored girls… runs through Sunday, June 5, at Broadway’s Booth Theatre.

The Universal Hip Hop Museum is a community partner for “100 Women of Hip Hop Sisterhood Sunday.”

for colored girls… is Camille A. Brown’s directorial debut on Broadway. She is the first Black woman to serve as both director and choreographer on Broadway in more than 65 years, bringing a reinvented, joyful and celebratory production of Shange’s seminal work back to its original home at the Booth Theatre, where the play premiered in 1976.

The cast stars Amara Granderson as Lady in Orange, Tendayi Kuumba as Lady in Brown, Kenita R. Miller as Lady in Red, Okwui Okpokwasili as Lady in Green, Stacey Sargeant as Lady in Blue, Alexandria Wailes as Lady in Purple, and D. Woods as Lady in Yellow. Rachel Christopher, Treshelle Edmond, McKenzie Frye, Kala Ross and Alexis Sims join the company as standbys and understudies.

The revival has received rave reviews by theater critics. Ntozake Shange’s for colored girls who have considered suicide/ when the rainbow is enuf is the “landmark of American theater” (The New York Times) that blazed a trail for generations to come. Now, this celebration of the power of Black womanhood returns to Broadway for the first time, reinvented, directed, and choreographed by “a true superstar of theater and dance” (NPR), Tony Award nominee Camille A. Brown.

Tickets are on sale for the show’s final weeks at http://www.telecharge.com. To attend “Sisterhood Sunday,” use the code FCGSISGRL. To attend “Brothers for colored girls…,” use the code FCGBROS. Both events are open to the public. Discounted tickets are now available to students who present a valid Student ID at $25 per ticket.