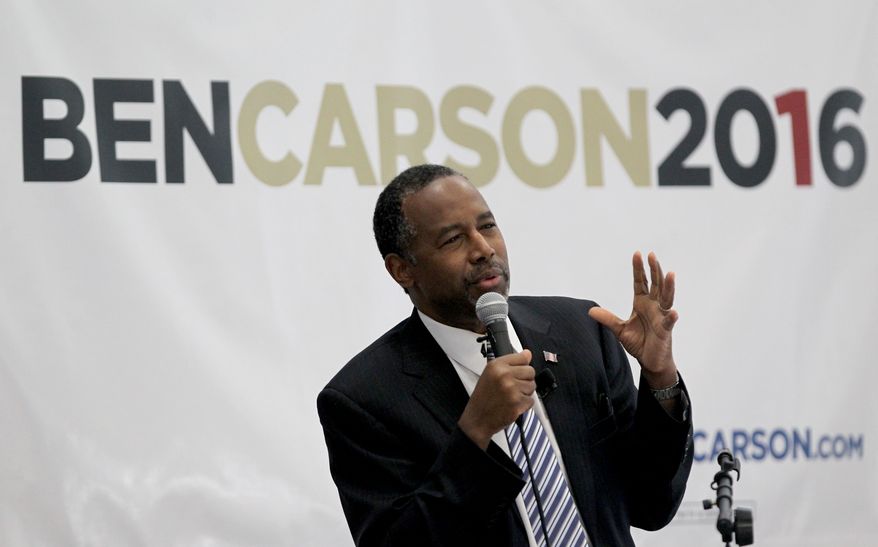 ST. LOUIS (The Washington Post) — Joined by Ferguson, Missouri’s mayor, Ben Carson spent Friday morning in the place where America’s new conversation on race and policing began. The neurosurgeon and presidential candidate got a guided tour of the small suburb, including the intersection where 18-year-old Michael Brown was shot and killed by a police officer in August 2014, then headed to an St. Louis airport hotel for a roundtable with activists, pastors, and politicians.

“I heard more than one time how the thing that really inflamed the community was the fact that Michael Brown’s body laid out on the street for four hours,” said Carson. “I think a lot of people understood that he had done bad things, but his body didn’t have to be disrespected. I heard also that people need to learn how to respect authority.”

Carson was the first declared candidate of either party to visit the city, though Sen. Rand Paul (R-Ky.) held a “listening session” before announcing his bid, and Harvard professor Lawrence Lessig made a visit before launching his. Unlike Paul, Carson kept the roundtable — and the tour — closed to press. According to Mayor James Knowles, who has invited any and all contenders to Ferguson, Carson’s tour included a stop at the city’s only coffee shop, lunch at an Italian restaurant, and conversations with the people who happened by. The mayor also tried to connect Carson with Brown’s father, though the scheduling didn’t pan out. Among the roundtable invitees were Ella Jones and Wesley Bell, two black Ferguson residents elected to city council in the wake of the Brown shooting; Lt. Gov. Peter Kinder (R-Mo.), the leading Republican candidate for governor, joined both the roundtable and the tour.

Bernie Sanders Tries to Meet with Black Leaders but Nobody Shows Up: Only 6 Congressional Black Caucus Members Attend