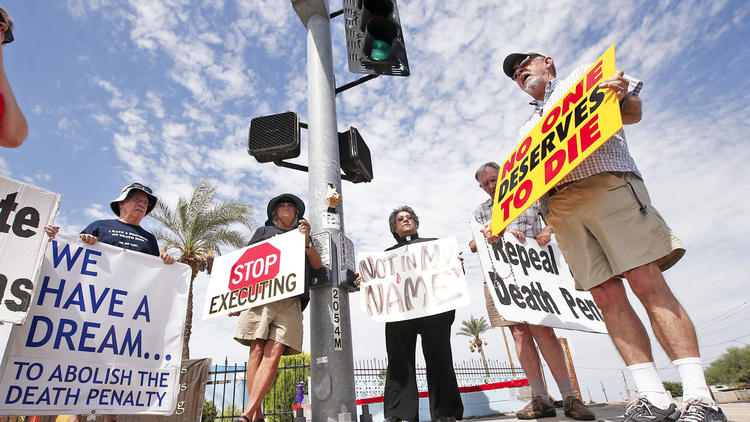 Death penalty opponents in prayer ahead of the execution of Joseph Rudolph Wood. (Associated Press)

(Los Angeles Times) – A convicted murderer in Arizona gasped and snorted for more than 90 minutes after a lethal injection Wednesday, his attorneys and witnesses said, dying in a botched execution that prompted the governor to order an investigation and the state Supreme Court to mandate that the materials used in the procedure be preserved.

Joseph Rudolph Wood III’s execution almost certainly will reinvigorate the national debate over the death penalty. He received an injection at 1:52 p.m. at the Arizona State Prison Complex in Florence. The execution became so prolonged that reporters witnessing the execution counted several hundred of his wheezes before he was finally declared dead at 3:49 p.m. — nearly two hours after the procedure began.

The incident comes in a year in which lethal injections had already triggered controversy over botched procedures and secrecy.

Wood had fought without success to get more information about the drugs and the expertise of his executioners. His request, which was rejected by the U.S. Supreme Court, prompted one prominent appellate judge to call for the return of the firing squad.

Drawing a Roadmap for Men of Color