Drawing a Roadmap for Men of Color
Advertisement 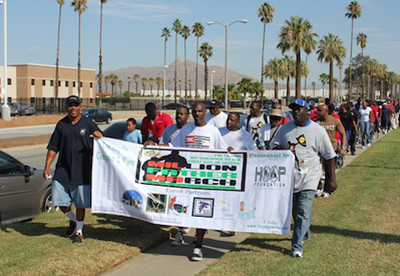 Men and fathers join the Million Father March in Riverside.

by Corey Arvin
Special to the NNPA from Black Voice News

Call it the state of black America. Blame it on social engineering or lack of parental guidance. However, studies continue to indicate that men of color, boys and adults, are struggling with achieving success that future generations of men can inherit or use as a model. Regardless of the origins of the issue, Terry Boykin, a regional mentor and community leader, believes it requires a diverse strategy, but one element must be always present: community.

For more than a decade, Boykin, Founder of Street Positive, has used a solutions-based approach to developing programs and events that support young black and Hispanic men. Boykin builds his programs often times with a small coalition of grassroots experts to bring together resources that participants can tap into that will improve their likelihood of reaching their academic, financial, or domestic goals.

Street Positive has hosted and created several programs and initiatives such as Young But Ready, the “Brother II Brother” mentoring day, and the Million Father March. Each program was designed to support or empower black and Hispanic men in a specific capacity.

Young But Ready, for example, teaches young men, averaging 12-to-22 years of age, financial planning and the value of entrepreneurship.

“We work with young men from an early age with the objective to not only discuss entrepreneurship, but create an entrepreneurial mindset so that they can see economic achievement and financial sustainability,” said Boykin. “I think in the black community it’s not emphasized enough. … How are we going to get them into a competitive arrangement where they can compete for these jobs and they are not prepared,” he said.

“The counter is to have young men develop skills that are going to allow them to succeed regardless of their career or the job market. We’re teaching them how to look for opportunities, helping them (discover) who they are, and their skills sets. We have not done that. A lot of our kids have degrees, but nothing in the bank,” Boykin said.

Black and Hispanic men are more susceptible to falling short of academic standards and being labeled “at-risk”. According to a PBS report, only 54% of African Americans graduate from high school. Statistics also indicate that in 2008, African-Americans and Hispanics comprised 58 percent of all prisoners.

Brother II Brother is a very personal cause for Brown who was inspired to jumpstart the program in 2007 based on a previous at-risk outreach program involving LAPD officers in the late 90s. For many years, Brown, a 27-year veteran of the LAPD, reflected on a “brother to brother” poem on his mantle. While working as a detective in the department’s Southeast division, he received many requests to speak to young black and minority men at churches and events. One day, he felt more compelled than ever by the poem sitting on his mantle to enact the Brother II Brother program. Tragedy later struck Brown, whose son, Stinson Ameer Brown, was fatally shot in 2009. It’s a day that remains etched in Brown’s memory — and another driving force behind his dedication to Brother II Brother.

“Brother II Brother rides on the shoulder of my son’s memory,” said Brown.

According to Brown, regardless how shady a young man’s background may be or how tough he wants to project himself, all of them pivot when they are in a different environment. Brown is heartened whenever friends or colleagues offer to share a new environment or even their homes with at-risk youth so that they can experience a better lifestyle.

“This epidemic is deep. It’s a psychological hard wire that has to be worked on a continuous basis,” said Brown.

““My goal is to put them in an environment they are not used to … to avail to higher learning. If other kids can do it, they can do it,” said Brown.

Brown noted a recent string of homicides in South Los Angeles where he is working with the community to address. He is currently organizing a peace march for Saturday that will culminate with a prayer at a shrine on 87th and Figueroa Streets.

“There’s something wrong with just accepting death. It’s a serious problem,” he said.

Boykin, who works with at-risk youth and boys who need guidance, stressed that parents must be involved in every facet of their child’s development if they are going to be successful. Fatherhood is especially important to shaping young men, especially those who may have a troubled background.

Last month, Street Positive completed an 8-week workshop as a part of the Fatherhood Legacy program. The workshops not only provided guidance for fathers, but also became an emotional outlet for some of the men who participated.

“We have men crying in the sessions frequently. I have yet to have a series of workshops where men did not reveal the mistakes they made, as well their heartaches, their setbacks, some of the apologies they wanted to offer. We have some men who have even lost their children to death and are dealing with the situation and not able to resolve it because they’re child is no longer alive,” he said.

According to Boykin, black men shoulder a lot stress, including cultural stereotypes that are not true, such as being absentee fathers. A report released in December by the U.S. Department of Health and Human Services showed that black men spend more time with their children than any other racial group, but the stereotype persists.

“African-American fathers are the most active fathers, but may not be under the same roof as their kids. I think they happen to be some of the most engaged fathers,” said Boykin.

Jatori Harris, a 29-year-old father, has joined several Street Positive programs since 2011, beginning with the Million Father March. Harris spent his childhood in foster care. With no direction from his parents to reference now that he is a father to a 3-year-old daughter, the workshops have been a significant benefit to him. Following Fatherhood Legacy workshop, he noticed an immediate improvement in his parenting, which he credits to the workshop.

“Communication has gotten a lot better,” said Harris. “I came into this program already dedicated to fatherhood, but having the support from them and watching from a far, I took in as much I could and saw the choices I could make,” he said.

The conditions young black men contend with received unprecedented attention in March after President Obama introduced the “My Brother’s Keeper” initiative. It was the first time a sitting President exposed the bleak realities of young black and Hispanic men. The announcement was immediately met with praise and criticism extending beyond party lines. Boykin wishes the initiative well, but pegged the program as a “politically motivated” gesture by Obama. Political qualms aside, the “My Brother’s Keeper” initiative does not fully address the financial infrastructure necessary to support a national initiative of its magnitude, Boykin said. It also reinforces Boykin’s concern that the black community is waiting for external intervention instead of addressing the issue alone.

“One of the things we have done is given too much responsibility of what we should be doing to other people. [Obama] has to do what he has to do to take care of his family, but my question is ‘what is it that we, the black community, are going to do given what we know … not with all of the politics and bureaucracy’,” said Boykin.

Post Views: 14
Related Topics:black americablack menmen of colorstate of black america
Up Next

Funeral Held for Man Who Died in NY Police Custody