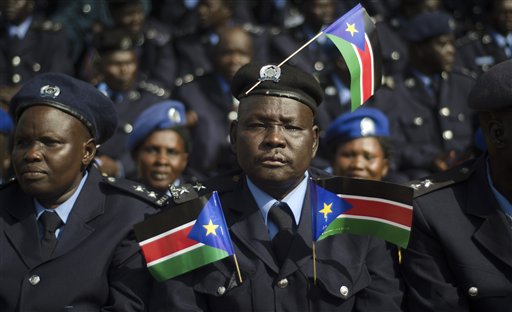 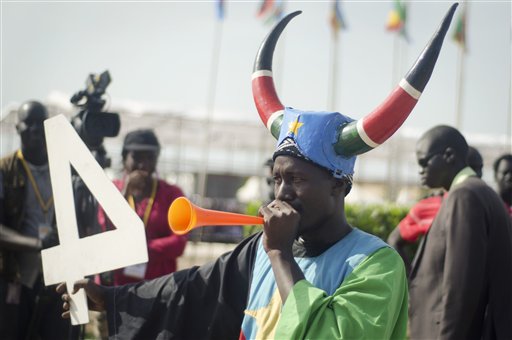 A South Sudanese man blows a horn as he attends an independence day ceremony in the capital Juba, South Sudan, Thursday, July 9, 2015. South Sudan marked four years of independence from Sudan on Thursday, but the celebrations were tempered by concerns about ongoing violence and the threat of famine. (AP Photo/Jason Patinkin)

JUBA, South Sudan (AP) — South Sudan marked four years of independence from Sudan on Thursday, but the celebrations were tempered by concerns about ongoing violence and the threat of famine.

South Sudan became the world’s newest nation in 2011 following a vote to secede from northern neighbor Sudan. But the young country fell into war after just 18 months as a result of a political dispute between President Salva Kiir and his former deputy Riek Machar, who is now the leader of rebel forces controlling some parts of South Sudan.

In his independence anniversary speech, Kiir blamed the rebels for what he called a “senseless war” that has persisted since December 2013. He said the moment in July 2011 when the country declared independence from Sudan “was the day we turned the page of injustice and inequality. Today, I want you to revisit the significance of that moment.”

The ceremony at the John Garang square in the nation’s capital, Juba, was attended by thousands of people, including Ugandan President Yoweri Museveni of Uganda, whose military is backing up Kiir’s forces as they try to put down the rebellion.

There is “nothing that we can celebrate” about the independence anniversary, said the prominent South Sudanese activist Edmund Yakani. “From 2013 until now there is a huge loss of lives, huge violence going on, and humanitarian crisis.”

South Sudan’s conflict has forced over 2 million people from their homes, including 730,000 to neighboring countries. Inflation has skyrocketed, with the South Sudanese pound losing more than half its value this year against the U.S. dollar. And families risk starving to death in the Greater Upper Nile region where fighting is most intense, according to the USAID-funded Famine Early Warning Systems Network.