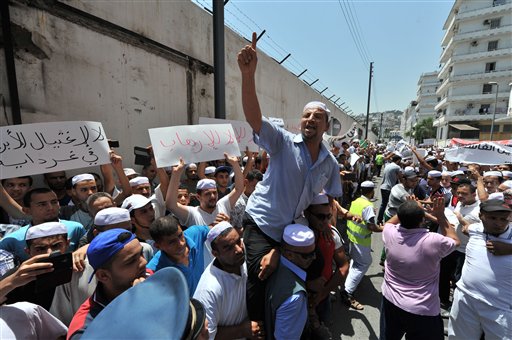 Hundreds of demonstrators of the Berber community stage a protest in front of a walled area where Algier’s newspapers are headquartered in support of Berbers in the southern Ghardaia region where at least 22 people have died in ethnic unrest, in Algiers, Algeria, Wednesday, July 8, 2015. (AP Photo/Sidali Djarboub)

ALGIERS, Algeria (AP) — Algerian President Abdelaziz Bouteflika issued an emergency plan on Wednesday to crack down on mounting ethnic unrest around the country’s southern oasis city of Ghardaia, which has left at least 22 people dead in the past two days.

The three-point plan covering security, justice and development put the area’s military commander in charge of both security forces and local officials trying to restore order, according to a statement from the president’s office.

The president ordered the prosecutor in the region to follow all lawbreakers “with diligence and severity,” the statement said.

The violence in the poor desert region of Ghardaia, more than 600 kilometers (375 miles) south of Algiers, was the latest episode of sporadic but sometimes deadly unrest between rival gangs of Berbers and Arabs.

Riot police moved in to quell the clashes that included fires and vandalism targeting shops, cars and public buildings in the towns of Guerrara, Ghardaia and Berianne, the official APS news agency reported.

It was not immediately clear how many security forces were in the region. At one point last year, thousands of troops were sent in to quell a spike in violence.

The prefecture put the number of dead in the latest clashes over two days at 22, most of them on Wednesday.

APS said most of the deaths were from “projectiles” and occurred in Guerrara, 120 kilometers (75 miles) northeast of Ghardaia. One person was fatally wounded in Ghardaia when hit by a rock to the head. Dozens of others were injured, some seriously, APS said.

The daily El Watan reported gunfire during the unrest, and wrote that “masked hordes on big motorbikes were combing neighborhoods of Guerrara and seeding terror among the population.”

Bouteflika sent Algeria’s interior minister to the area and later called the urgent high-level security meeting to discuss the gravity of the latest confrontations and decide a plan of action. Among those present were the prime minister, defense officials and the army chief of staff.

Ghardaia, a UNESCO world heritage site, has been at the epicenter of the unrest. Members of the local Berber community, known as Mozabites, speak their own language and follow a different school of Islam than the majority of Algerians. The two groups compete over limited jobs, land and housing in the impoverished south.

Tensions escalated after a Mozabite cemetery was desecrated in December 2013. By October of last year, a dozen people had been killed and hundreds injured in clashes.

The three-point plan issued by the president’s office Wednesday also included an order to put in place already-decided programs to spur economic and social development.