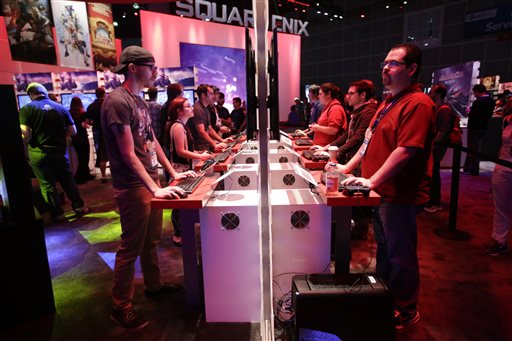 LOS ANGELES (AP) — Where the ladies at?

At last week’s Electronic Entertainment Expo, video game developers hyped upcoming titles featuring super-soldiers, assassins, bank robbers and secret agents. They all had one thing in common: They’re men. The continued lack of female protagonists in games shown off at E3 highlighted an issue that continues to loom over the video game industry. Why is it still such a dude fest?

“It’s boring that we’re continuing to have this conversation,” said Belinda Van Sickle, president and CEO of the advocacy group Women in Games International. “I started in the industry nine years ago and it seems like we’re having the same conversation with the same responses from industry insiders, gamers and the media. It needs to be more substantive.”

While there were a few notable exceptions at this year’s E3 — like thrill seeker Lara Croft in “Rise of the Tomb Raider” and sci-fi survivor Amanda in “Alien: Isolation” — male characters still far outnumber female protagonists in video games.

Everyone has a different answer as to why the issue persists.

“The more women we have playing games, the more we will be able to have a balance between women and men in the games,” said Yves Guillemot, CEO of Ubisoft.

Ubisoft came under the most fire at E3 after revealing that the playable characters in the co-op modes of both its historical adventure “Assassin’s Creed: Unity” and shoot-’em-up “Far Cry 4” would all be men. Despite the fact previous installments of those series featured female avatars, the developers cited technical limitations for the lack of girl power.

He noted Activision’s “Call of Duty: Advanced Warfare,” the latest installment in the military shooter franchise, will feature a vital female character in the single-player campaign, as well as the return of playable female avatars in the multiplayer mode.

In addition to technical issues, the reasons given for gender imbalance in the game world can include psychology, financial justifications and perhaps sexism. Yet such excuses don’t seem to be holding up anymore when one considers the state of the industry: audiences for games are changing; the latest generation of consoles is more powerful than before; games have ballooned into a behemoth $21 billion business.

“Our industry is strongest when it appeals to the broadest possible audience,” said Michael Gallagher, president and CEO of the Entertainment Software Association, which organizes the E3 trade show. “The clearest path to appealing to the world as an audience is to make sure you’re diverse in your game creators. That’s the path we’re committed to at ESA.”

Many in the industry believe the problem stems from the game makers themselves, who are mostly men. Van Sickle of Women in Games International said that 12 to 18 percent of the industry is women and many game developers and publishers have problems finding and retaining female employees. Van Sickle said change is happening, but it’s slow going.

“My thesis is that it’s a male-dominated business,” said Patrick Soderlund, executive vice president at EA Studios. “I’m not sure that flies, but I think it overall may have something to do with it — that boys tend to design for boys and women for women. I’m just happy that we have a game with a female heroine.”

When female characters did appear in games promoted at this year’s show, many were part of a team, such as trapper Maggie in the monster hunting game “Evolve” and knight Isabeau in “The Order: 1886,” a moody adventure game that finds the Knights of the Round Table battling supernatural forces.

“Developers have a tendency to paint female characters in very specific, stereotypical lights,” said “The Order” creative director Ru Weerasuriya. “We wanted someone who was grounded in reality, but in actuality is sometimes a better knight than the others. There’s no reason why that shouldn’t be the case in games. That’s the case in the real world, right?”