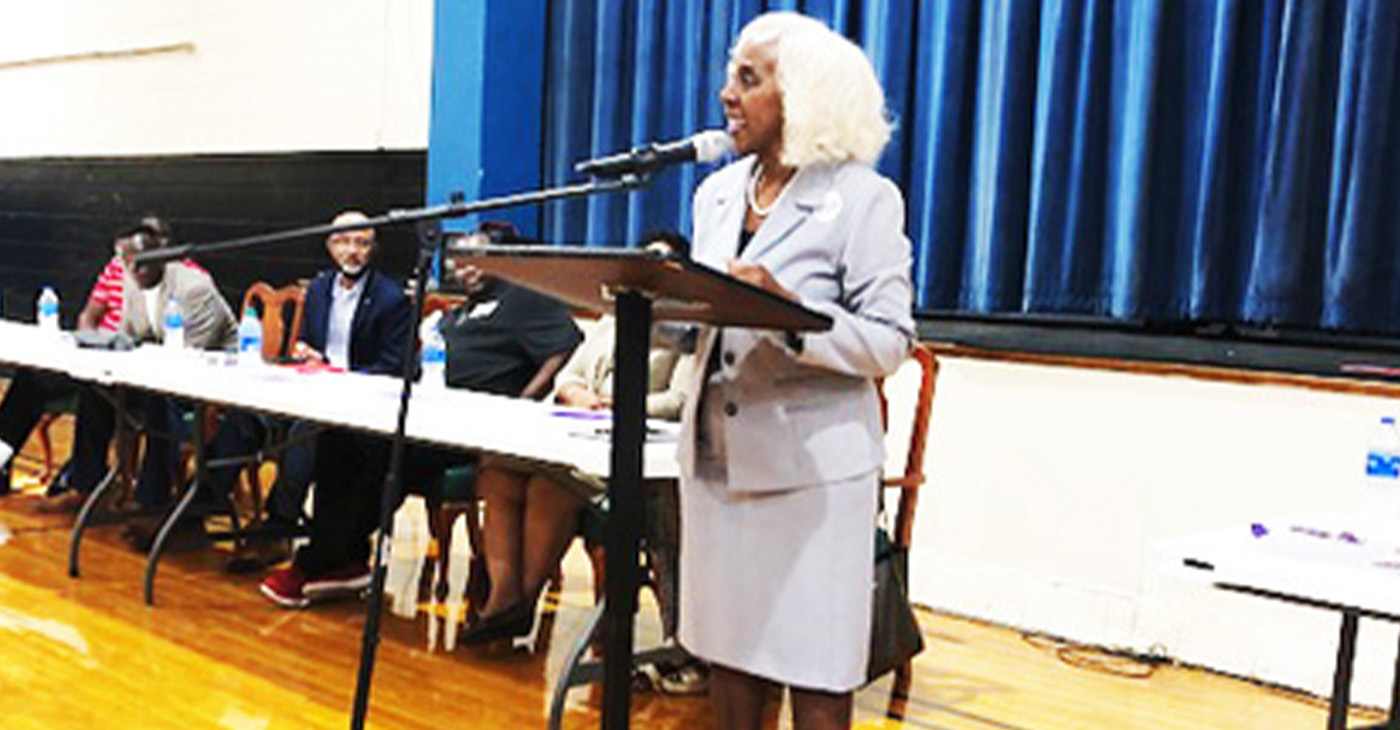 Yolanda Flowers, the first Black candidate of a major party for Governor of Alabama, was the guest speaker at a rally Sunday at the Robert H. Young Community Center in Eutaw. Flowers is running against incumbent Governor Kay Ivey in the November 8, 2022, General Election.

The rally was sponsored by the Greene County Democratic Executive Committee to introduce people in the Alabama Black Belt to “the next Governor of Alabama,” Lorenzo French, Chair of the Democratic Executive Committee said the rally was an historic occasion to support the Flowers for Governor campaign. Naomi Val Goodson Cyrus served as Mistress of Order and main cheerleader for the rally. There were also musical tributes by Loretta Webb Wilson and her daughter, Lauren and Rev. Kendrick Howell, Pastor of Little Zion Baptist Church in Tishabee, Alabama.

Greetings at the meeting were brought by Commission Chair Allen Turner, Latasha Johnson, Mayor of Eutaw and Spiver Gordon, civil rights leader. All stressed the importance of campaigning on the phone, door-to-door and attending meetings and rallies to get voters to turnout to vote in the coming election on November 8, 2022. Absentee ballots are available now at the Clerk of Court’s Office, for people who will not be able to get to the polls in November.

Flowers was introduced by Tony Humphries, Vice Chair of the Tuscaloosa Democratic Party who reviewed her education and work history as a teacher and speech pathologist in Tennessee and Alabama public school systems. She is the mother of 3 children, 12 grandchildren and 5 great grandchildren.

Flowers in her speech said she was aware that many people to do not know that she and other candidates, including Will Boyd for U. S. Senate and Pamela Lafitte for Secretary of State, are running on the Democratic Party ticket in the November election. She mentioned there are also ten (10) Constitutional Amendments on the ballot for voters in November.

Flowers said, “I am running because Alabama is a rich state, but poverty is too high. We need better education, health care and criminal justice reforms for the people of Alabama.”

She said, “My platform includes more funding for education, adopting a lottery for education and other measures to raise teacher salaries, and provide teacher assistants in every classroom to give more personal attention to students. I support better health care including the expansion of Medicaid, which Governor Ivey has failed to act on in seven years. I believe in a woman’s right to choose and better reproductive care in the state. I am for reforming the criminal justice system that has hurt too many young Black people. I want to end voter suppression and increase the chance to vote for all people in Alabama, especially Black people who have been hurt in the past. Overall, I want to make Alabama a better place for all the people who live here.”

Flowers indicated that she had very limited financial resources to support her campaign, which hampered her ability to reach voters. Lorenzo French presented her a check for $1,000 from the Greene County Democratic Executive Committee and challenged the other 67 county committees to match Greene County’s efforts. French raised an additional $750 from persons at the rally to support the Flowers campaign.

Responding to the financial challenge, Rev. Kendrick Howell said each Black church in Greene County should raise $500 for the Flowers campaign.

Several ministers who were present at the meeting met after the rally to plan how to reach the 75 churches in Greene County with the message to contribute to Flowers campaign.

Closing out the rally, Johnnie Knott, former Circuit Clerk, and current State Democratic Executive Committee member representing House District 72 (Greene County) said “The best thing for voters to do was to put one ‘x’ on their ballot on November 8 and vote the straight Democratic ticket, which would elect Yolanda Flowers and all the other Democratic candidates, including local candidates in Greene County.”

Several speakers at the rally noted that many of the local candidates, running with Flowers on the Democratic ticket, did not attend the rally, including the Sheriff, county commission and school board candidates. “We need more preachers, teachers and elected officials to come to meetings like this rally, to get the message out so we will have a great turnout for November 8th,” said Spiver Gordon.

For more information on the Yolanda Flowers campaign, she invited people to go to her website: http://www.yolandaforgovernor.com. Persons who want to contribute to her campaign may use her CashApp at: $yolanda4governor, to make donations.

This article originally appeared in The Greene County Democrat.