Who Won the War on Poverty?
Advertisement 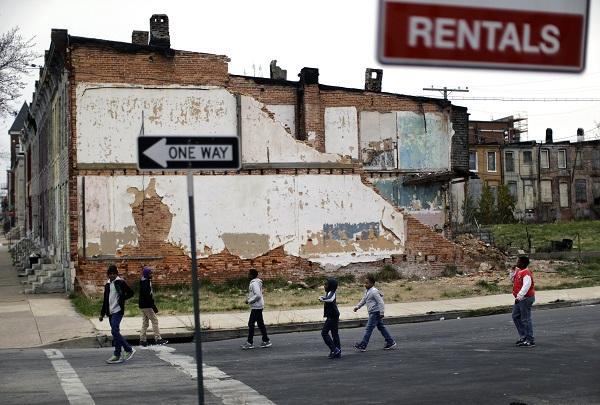 In this April 4, 2013, file photo, a group of boys walk past a partially collapsed row house in Baltimore. The nation’s poverty rate stood still at 15 percent in 2012, the sixth straight year that it has failed to improve. The Census Bureau reported Tuesday, Sept. 17, 2013, that 46.5 million Americans were living in poverty in 2012. (AP Photo/Patrick Semansky)

WASHINGTON (NNPA) – President Ronald Reagan quipped: “In the 60s we waged a war on poverty, and poverty won.”

This month, 50 years since President Lyndon B. Johnson signed the Economic Opportunity Act, effectively kicking off the War on Poverty, is a good time to answer that question.

Today, the Census Bureau reports that 49.7 million Americans are living in poverty. That’s 15 percent of the nation, a poverty rate that has persisted since President Clinton left office. The child poverty rate, which had also plateaued around 18 percent before the Great Recession, has now crept up to 23 percent. The number of people in deep poverty – those who’d have to make twice their current earnings to meet the federal threshold of poverty – has hovered around 5 percent since 1973. Today, that figure doubles for children.

For Black Americans, the poverty rate is 25.8 percent. A staggering 40 percent of Black children live in poverty as of 2012, the most recent Census Bureau data.

But it’s also true that poverty has dropped from 26 percent to 16 percent since 1967, if measured with the inclusion of income from government assistance. If the Census Bureau measured poverty without that inclusion, today’s poverty rate would be closer to 30 percent. During the Great Recession alone, the poverty rate would have jumped three percentage points in two years (24 to 27 percent).

In other words, safety net programs such as Social Security, the Earned Income Tax Credit, housing vouchers, and so on have stabilized the poverty rate, even during the Recession.

Whether the war is being won or not, it’s clear that the battle is still underway. And just as poverty is still thriving, so too is the debate on how to eradicate it.

Former vice-presidential candidate Rep. Paul Ryan (R-Wis.) is taking aim at the topic with the release of “Expanding Opportunity in America,” a discussion draft from the House Budget Committee, which he chairs. The proposal lays out a plan to fund assistance programs “more wisely” by consolidating the most successful ones – Head Start, food stamps (SNAP), housing assistance vouchers, and others – into a “Grant Opportunity” program.

Under this program, states would receive the same amount of federal funding for safety net programs, but states would be allowed to allocate those funds among the programs as they see fit.

To receive the Opportunity Grant, states must create a plan that moves people from poverty to independence; requires all able-bodied recipients to work or “engage in work-related activities” in exchange for benefits; encourages innovation among services providers; establishes a third-party evaluation method.

Ryan would like to pilot the Opportunity Grant program in a few to-be-determined states on a voluntary basis.

“The goal is to make it easier for low-income families to get the assistance they need and to find work,” the proposal reads. “Right now, families must visit a variety of offices and providers to get aid. Under this proposal, they will work with a single provider for all their needs.”

Not everyone is impressed.

“It’s filled with little gems. It proposes to take up to 11 programs and put them into this block grant. The Congressman says we would hold the money the same. But you should note that Congressman Ryan hasn’t taken back his budget,” says Peter Edelman, professor at Georgetown Law Center and faculty co-director of the Georgetown Center on Poverty, Inequality and Public Policy.

“For four years in a row he has proposed cutting $5 trillion over 10 years, and 69 percent of that is from programs that help low-wage, low-income people.”

Poverty is a complex problem. This complexity is a major reason it persists, and is also why some advocate a crafted, multilayered approach.

For example, underemployment and unemployment are one aspect of the problem. Stagnant wages are another. At the same time, housing, childcare, and higher education costs continue to rise. There is also the link between race and poverty.

A chief criticism of this multilayered approach is that there are already too many costly state and federal agencies and programs, with questionable effectiveness. A recently released report from the House Budget Committee, titled, “The War on Poverty: 50 Years Later” describes the current safety net system as “duplicative and complex.”

“There are at least 92 federal programs designed to help lower-income Americans. Congress has taken a haphazard approach to this problem; it has expanded programs and created new ones with little regard to how these changes fit into the larger effort,” the report reads. “Rather than provide a roadmap out of poverty, Washington has created a complex web of programs that are often difficult to navigate.”

But there are other ways to resolve poverty without cutting programs or spending more money. Last week, Edelman and Cook served on a panel sponsored by the American Bar Association to explore the question: What is the role of government, advocates, and more specifically, the role of lawyers, law schools, and the organized bar in addressing poverty? Edelman, Cook, and the other panelists agreed that the best path toward alleviating poverty is through both government action, and community partnerships/strategies.

“One has to continue to put pressure on the powers that be to construct and envision new innovative policies that really work at the ground level,” Cook explained. “But also we’ve got to work at the grassroots level. When both of those emphases meet you have potential for a powerful, and potentially transformative situation.”

In the meantime, the War on Poverty continues unabated.