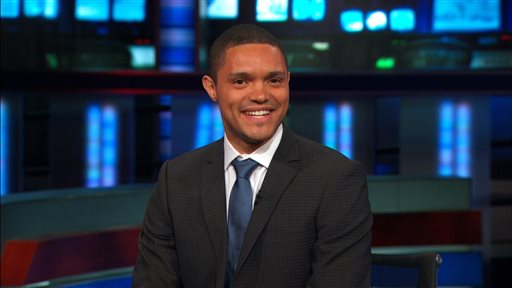 Noah riffed at length Tuesday night about black fear of police violence. He called out pundits who make snap judgments linking Muslims and terrorism. And the native of formerly apartheid South African marveled at his discovery of “charming American racism.”

But the comedian took a pass on the barbed political humor and commentary that’s a mainstay of Stewart’s Comedy Central program. Not even a Donald Trump hair joke made it into Noah’s repertoire this night.

If he has a burning passion to referee the 2016 U.S. presidential campaign slugfest already well underway — or other aspects of American politics — he hid it from an audience of fans and TV critics who were invited to his performance in advance of a media Q&A with the performer Wednesday.

How Noah the standup will merge or diverge from Noah the “Daily Show” host will be seen when he takes over Sept. 28 from Stewart, who’s days away from his last show on Aug. 6.

Noah, 31, referred only briefly to the high-profile stage he will soon command, one that Stewart made an unlikely but potent part of the electoral process.

“As some of you may or may not know, I got a job,” Noah said, drawing cheers and applause. “That’s how my grandmother put it.” He later joked that his mother was prouder of his youngest brother’s election to his school’s student council.

Throughout his crowd-pleasing routine, Noah employed skillful mimicry of American dialects, a variety of sound effects — including “Star Wars” light sabers in action — and flashes of his notable dimples. The G-rated humor was mostly in service of his observations on ethnic divisions.

He warmed up the crowd with a riff on the commonly heard “whoo-hoo” exclamation that he called the “sound of happiness, white happiness.” Not always the case for blacks, he said.

“There’s a moment in ‘whoo-hoo’ that sounds eerily similar to a police siren,” Noah said. He then segued into a discourse on recent black deaths, saying the “unspoken agreement” that protected blacks who behaved cautiously when stopped by police has been abandoned.

“Now, I don’t know how not to die. Because every time I turn on the news, another black person has been killed for seemingly fewer and fewer reasonable reasons,” he said, starting with the non-police shooting of teenager Trayvon Martin in Florida.

If the lesson was to avoid wearing hoodies while black, Noah said, it was rewritten with the deaths of Michael Brown in Missouri (“He didn’t have a hoodie. He approached a police officer”) and again with Walter Scott in South Carolina (“Running away from a policeman, he got shot five times in the back”).

Noah also targeted what he called the kneejerk labeling of Muslims as terrorists, the lack of Hispanics in the “Star Wars” films and the jarringly friendly racism of Americans, including a “classic Southern belle” who he said gushed over him yet used a racial epithet.

‘The Wiz Live!’ Now Has its Wiz and Witch: Queen Latifah and Mary J. Blige