THE WORLD IN THEIR HANDS: The Center for Puppetry Arts’ creative African-American ensemble are sharing art and inclusion with international audiences
Advertisement 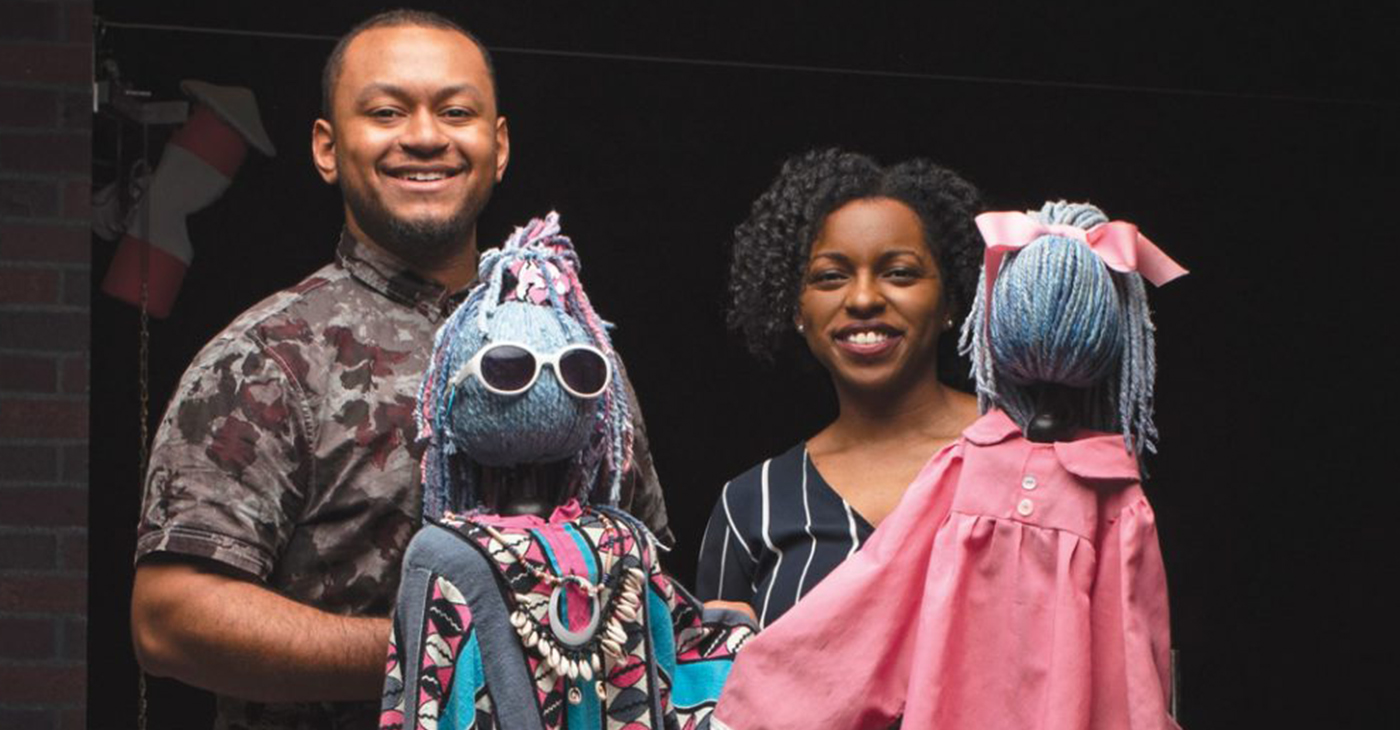 Atlanta-based artists Greg Hunter and Jimmica Collins on set for the Center for Puppetry Arts’ 2019 production of ‘Beauty and the Beast.’ (Photo: Reginald Duncan / The Atlanta Voice)

Using recycled materials, African-American puppeteers Greg Hunter and Jimmica Collins know how to command a performance stage, capturing kids’ and their parents’ hearts with each gesture.
It’s literally all in the hands, too.

“The process starts with the puppet,” said Collins, 27, who is starring as Beauty in Atlanta’s Center for Puppetry Arts’ rendition of “Beauty and the Beast.” “I find my voice, which this puppet’s voice is fun with sass. Then, I work on movements.”

Beauty’s groovy Mama is played by Hunter, who naturally draws from everyone’s Southern hairdresser, aunts, cousins and friends, to develop the urban-dwelling character.

The two puppetry artists’ leading presence in this 2019 summertime love tale signifies a cultural shift in who exactly is telling the world of puppetry’s stories.

African-Americans playing prominent roles both on the stage and behind the scenes isn’t taken lightly at the center — America’s largest nonprofit organization dedicated to the art of puppetry. It puts diversity and inclusion at the forefront of its productions and museum exhibits yearlong.

“What we do is universal,” said Hunter, also 27. “It’s not about us. It’s about bringing our puppets to life in a way that’s relatable to different cultures and people coming from different places.”

The center’s main stage is where the magic happens.

For the past month, Hunter and Collins have given the popular musical a hip-hop spin in a puppetry style known as Czech black theater. The actors are clothed in all-black attire with a tight light only curtaining the puppets.

The two collaborate with a nearly 15-member crew of other puppeteers and stage/ musical/ lighting/ sound/ scenic designers to pull off the cleverly crafted, well-illuminated performance.

A real “quitting time” horn blows in one scene. In another, leaves actually look and sound like they’re rustling in the wind.

“From the sound to light effects, everything we perform is in sync,” said Collins, an experimental theater artist who also shows off her Baptist church singing vocals as Beauty. “Working together, we’re able to bring the puppets’ world to life.”

In fact, Beauty is so in tune with Mama that young audience members instantly laugh, turn to their own mothers and whisper, “That’s you, momma. That’s you!”

While Collins is in her fifth production at the center, this production is Hunter’s debut regarding his acting and singing chops. They both earn standing ovations and often random fist-led jumps from kid viewers.

“I play a character who says everything our moms say,” Hunter said.

Hunter said he learned of the center’s acting opportunities after participating in a Pinewood Atlanta Studios puppet-animated show called “Moon and Me.” Pinewood, located in Fayetteville, Georgia, is the second-largest purpose-built film and entertainment studio in North America and where many of the Marvel films have been filmed.

“I learned so much about how technical puppetry is,” Hunter said, “and that was something I wanted to continue. That’s how I ended up working here with such a great group of creative people.” 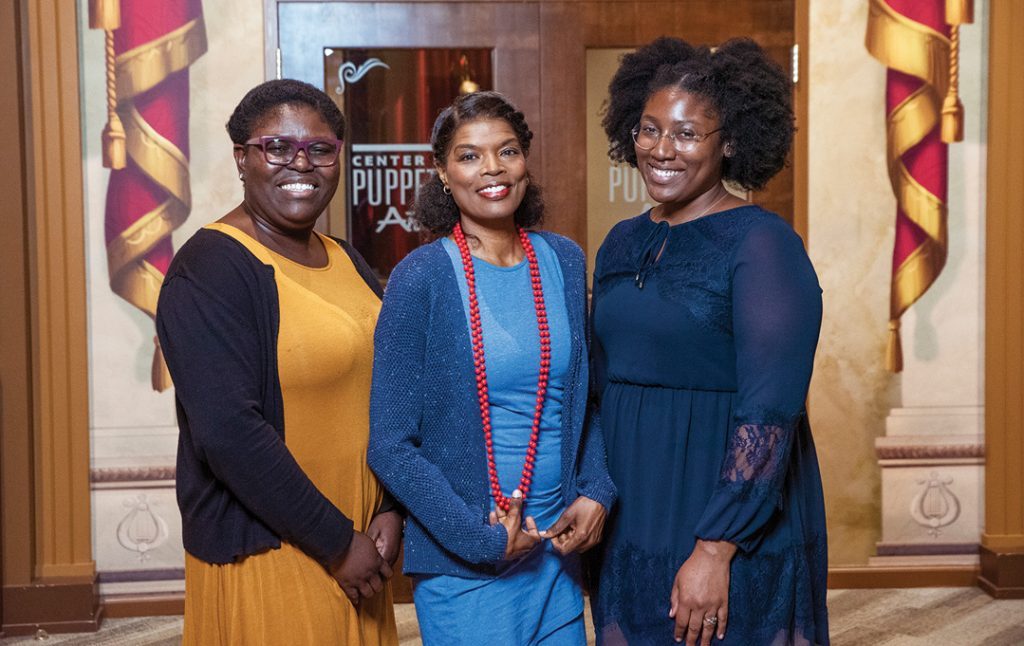 While Hunter and Collins headline the main stage, Yanique Leonard ensures Big Bird and Miss Piggy are fluffed and fancy for public showcasing.

The collections manager is responsible for the care of more than 5,000 artifacts — including 500 Jim Henson puppets.

“I’m all about preventative conservation,” said the 27-year-old, afro-wearing museum professional. “I have to make sure the puppets are comfortable in their cases and in the right environment for long-term preservation.”

With a background in public history and museum studies, Leonard also conducts in-depth research to give museum visitors documented stories connected to the puppets’ creation.

She works between the archives and center’s Worlds of Puppetry Museum, which includes Jim Henson and global collections.

“It’s a cool story who we acquired marionettes Sportin’ Life, Mingo and Peter the Honey Man from the New England Marionette Opera (NEMO),” Leonard said. “NEMO was America’s only opera company performed entirely with marionettes and that staged a full puppetry production of ‘Porgy and Bess’ in 1994. Five years later, the opera burned and more than 200 handcrafted marionettes were destroyed. Fortunately, frozen weather preserved these three puppets.”

Sammy Davis Jr. fans will appreciate marionette Sportin’ Life, who is sculpted after the legendary entertainer and star of the 1959 film.

“I get to care for and experience puppets the average person will never see,” said Leonard. “I encourage anyone to come into this field of study if they’re passionate about culture, history and stories we need to share with our communities.”

Three floors up from Leonard’s puppetry archive and library, Liz Fagbile teaches youth how to build their very own puppet.

“Depending on the show style the puppetry artists are performing throughout the year, I help create puppet projects around each theme,” said the 30-year-old education coordinator. “Some of these kids are experiencing a puppet for the first time in their lives. I’m contributing to an important memory in their childhood.”

After kids finish constructing their puppets, Fagbile provides a colorful curtain for family role-playing and photo ops.
What she’s realized in this position: Puppetry has no age limit.

“For 45 minutes to an hour, the kids aren’t the only ones getting into our learning activities,” Fagbile said. “At first, adults are kind of stand-offish. I encourage their curiosity, and that helps them get involved. They instantly get in touch with their creativity — sometimes reconnecting with talents they lost along the way.”

Outside the classroom, Fagbile orchestrates outreach programming, staff scheduling and the inventory for puppetry supplies.

“I started out as a volunteer five years ago,” she said. “I fell in love with this magical place. I’ve been able to expand my knowledge of puppetry, arts and entertainment.”

Education extends further with teaching artist and docent Paulette Richards. She has served as a docent in the Worlds of Puppetry Museum since 2015. Her introduction to Jim Henson’s animatronic puppets inspired the former English professor to create her own rudimentary robots as learning tools.

“It’s funny,” Richards, 56, said. “I’m really engaged in science, technology, engineering, arts and mathematics — known as STEAM education — in a way I would have never imagined. It’s taken me in so many directions.”
Richards’ work has traveled the nation. She has taught animatronic puppetry workshops at the center, Georgia Tech’s Hollis Innovation Academy and Puppeteers of America’s National Puppetry Festival.

This past year she served as co-curator of the “Living Objects African-American Puppetry” exhibit at the University of Connecticut’s Ballard Institute and Museum. The exhibit analyzed the uncomfortable legacy of blackface minstrelsy in American puppetry.

“The research I conduct is crucial to the types of stories we tell or have others tell about our culture,” Richards said. “I want to make sure the stories that came from Africa to our porches and are now part of theater productions are accurate and representative of us.

The Center for Puppetry Arts understands this notion and has put people of color in a position to continue to contribute to puppetry as a whole.”