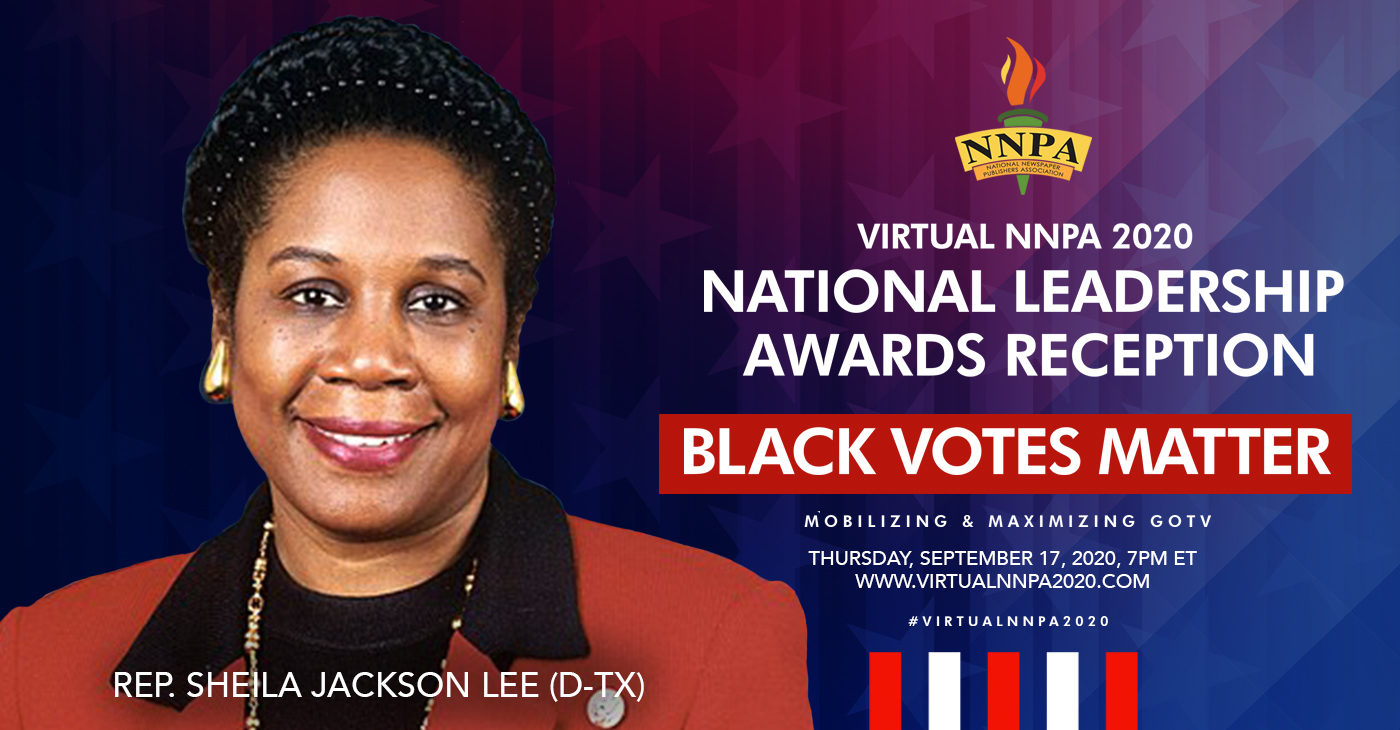 Congresswoman Sheila Jackson Lee (D-Texas), an influential and forceful voice in Washington, D.C., and serving her thirteenth term as a member of the U.S. House of Representatives, will receive the National Newspaper Publishers Association (NNPA) 2020 National Leadership Award.

Each year, the NNPA Board recognizes courageous Americans who have impacted the nation and world positively.

This year’s recipients include elected officials, a business maverick, and an educator. NNPA Board members said, while the recipients’ career paths may be varied, the impact of their shared commitment to creating meaningful and beneficial change in the lives of African Americans cannot be underestimated.

Teh Congresswoman will receive the National Newspaper Publishers Association (NNPA) 2020 National Leadership Award during a virtual ceremony on Thursday, Sept. 17 broadcast at http://www.virtualnnpa2020.com.

She was among the first to call for the impeachment of President Donald Trump. At the beginning of the 116th Congress, she authored, introduced, and saw the Violence Against Women Act’s reauthorization.

She also introduced several bills, including the Juvenile Accountability Block Grant Reauthorization and Bullying Prevention and Intervention Act, H.R. 71, the Federal Prison Bureau Nonviolent Offender Relief Act of 2015, and H.R. 4660, an Amendment to the Commerce, Justice, and Science Appropriations Act for Fiscal Year 2015 affirming the authority of the Attorney General to reduce prison overcrowding by developing and implementing lawful policies relating to requests for executive clemency from deserving petitioners.

Additionally, Congresswoman Jackson Lee has led the call for reparations for the descendants of African slaves.

During a 40-minute discussion with BlackPressUSA, Jackson Lee said, “40 acres and a mule was not a joke; it was supposed to be real.” The congresswoman authored and pushed H.R. 40, a bill that would fund a commission to study government reparations.

She said the commission would enjoy a level of specificity and actionability not previously discussed or realized. NNPA President and CEO, Dr. Benjamin F. Chavis, Jr., a pupil of Dr. Martin Luther King, Jr., and a noted civil rights leader, applauded the congresswoman’s efforts.

He pledged that the NNPA – through the Black Press of America pages – would issue a call to action to mobilize all Americans to support H.R. 40.

The bill has the support of most Democrats and American citizens, and the U.S. Conference of Mayors, whose executive committee unanimously passed a resolution supporting H.R. 40.

In a recent letter to Jackson Lee and Sen. Cory Booker (D-NJ), the mayors reiterated their support for the bill and noted the need to break down systemic barriers to justice and equality.

“We recognize and support your legislation as a concrete first step in our larger reckoning as a nation, and a next step to guide the actions of both federal and local leaders who have promised to do better by our Black residents,” U.S. Conference of Mayors and Louisville, Kentucky, Mayor Greg Fischer wrote.

Lee encouraged Dr. Chavis to keep the issue at the forefront of Black-owned newspapers, to which he gave resounding approval.

“From this day forward, we will put out the call. Just as we are putting out the call for 2020 Census participation and the call for all Black people to cast their vote in November,” Chavis stated.

Jackson Lee added that casting votes at the ballot box is equivalent to casting a vote in favor of reparations, something she believes should happen.

“We now have an opportunity, through H.R. 40, to have the highest level of discussion about systemic racism and race,” Jackson Lee explained.