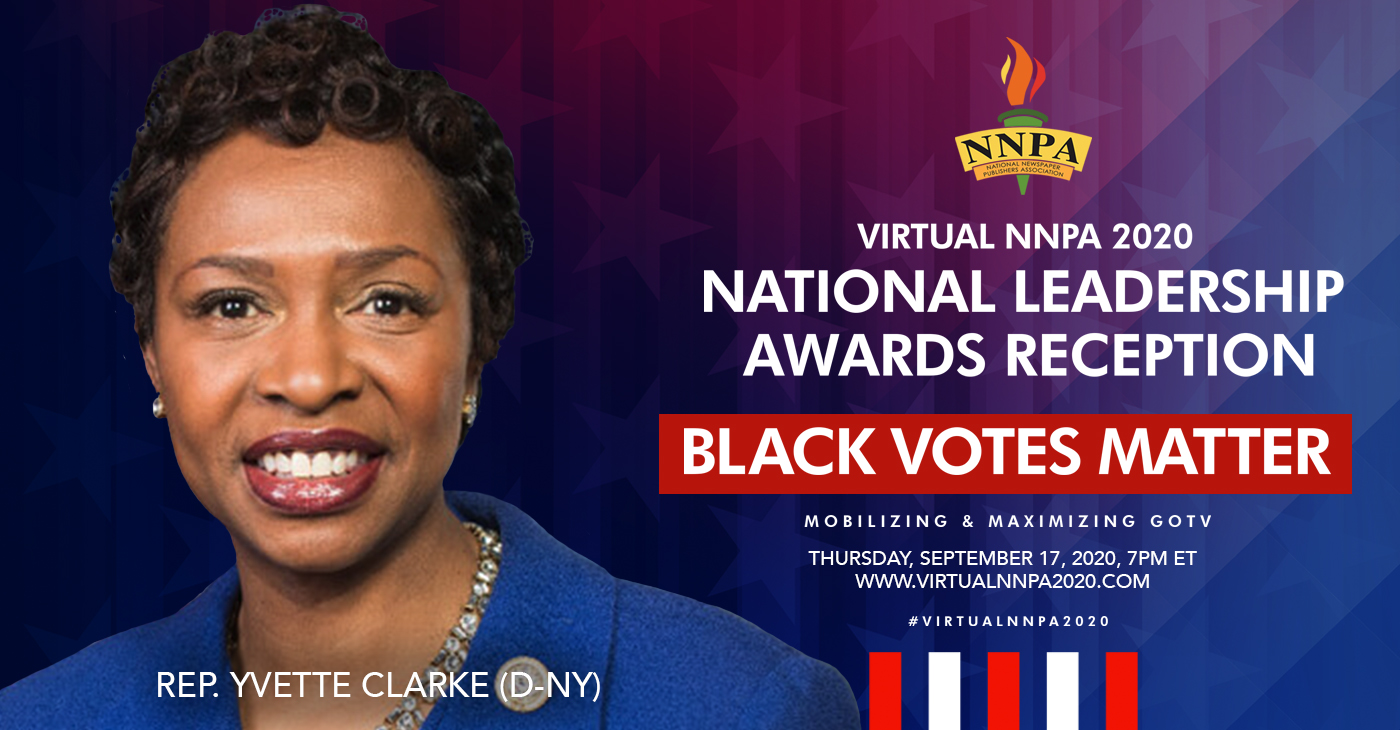 As the Representative for New York’s Ninth Congressional District, Congresswoman Clarke has dedicated herself to continuing the legacy of excellence established by the late Honorable Shirley Chisholm, the first Black woman and Caribbean American elected to Congress.

Hailing from Central Brooklyn, Congresswoman Yvette Clarke (D-NY) said she feels honored to represent the community that raised her.

A proud daughter of Jamaican immigrants who took her passion for her Caribbean heritage to Congress, Congresswoman Clarke co-chairs the Congressional Caribbean Caucus and works to foster relationships between the United States and the Caribbean Community.

Vice-Chair of the powerful Energy and Commerce Committee and a member of the Homeland Security Committee, Congresswoman Clarke also chairs its Immigration Task Force while acting as an active member of its Census 2020 Task Force.

Each year, the NNPA recognizes courageous Americans that have impacted the nation and world in positive ways. This year’s recipients include elected officials, a business maverick, and an educator.

NNPA Board members said while the career paths of the recipients may be varied, the impact of their shared commitment to creating meaningful and beneficial change in the lives of African Americans cannot be underestimated.

Congresswoman Clarke has remained an outspoken critic of President Donald Trump and an equally vocal proponent of the Black Press.

“It’s very clear that the Republican party has transformed itself into the party of Donald Trump. His specific and personal agenda is very dangerous,” Congresswoman Clarke told NNPA Newswire.

“It has been a demise for all progressive thinking. Our community needs to be upwardly-mobile and protected during the time of a pandemic.”

As the Representative of New York’s Ninth Congressional District, Congresswoman Clarke has dedicated herself to continuing the legacy of excellence established by the late Honorable Shirley Chisholm, the first Black woman and Caribbean American elected to Congress.

In the 116th Congress, Congresswoman Clarke introduced landmark legislation, which passed in the House, the Dream and Promise Act (H.R. 6).

This legislation would give 2.5 million DREAMers temporary protected status and provide deferred enforcement departure recipients with a clear pathway to citizenship.

She said it’s difficult to overstate the importance of the Black Press, specifically Black-owned media.

“Black-owned media is critical for all of us in 2020. The fact that we have an independent press that speaks to the lived experiences of Black people in America and throughout the world; the fact that it’s unvarnished and unfiltered and with media that is Black-owned and Black-led Black-owned, we can confront those who continue in the 21st century to harbor ill will, who continue to perpetuate inequality and racism,” Congresswoman Clarke stated.

“The Black Press provides a place for our people to go to get accurate information on the status of Black people in every endeavor and every sphere, and we can get the truth of what our actual status is,” she said.

“The Black Press is critical. I have been a fighter for the Black Press and its ownership and Black equity and leverage getting advertising in our Black Press.

“I urge our people to continue to subscribe to and demand those mainstream advertisers to advertise in the Black Press and tell them that, if they want to speak to us, they have to advertise through our Black Press.”

PRESS ROOM: The Board Challenge Launches Pledge for U.S. Boards of Directors to Add a Black Director Within One Year