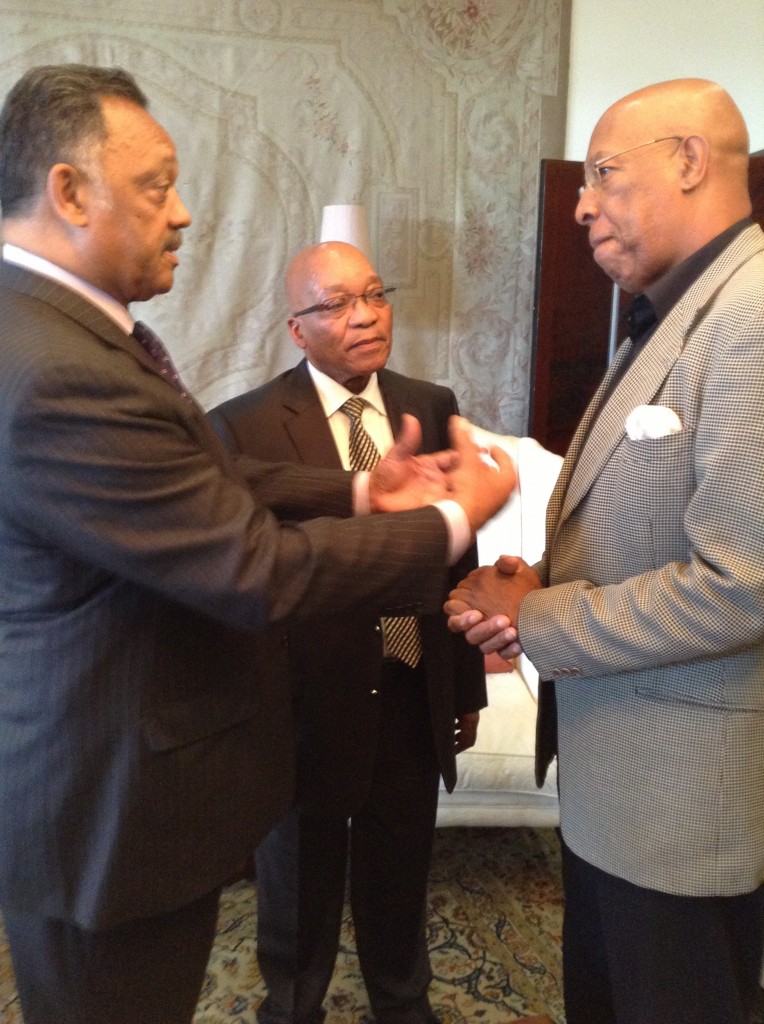 JOHANNESBURG, South Africa (NNPA) – When international icon and former political prisoner Nelson Mandela was elected president of South Africa in 1994, it marked a watershed moment for the former minority-ruled country. Mandela, the standard bearer for the African National Congress, won with 62.6 percent of the vote. The ANC captured 252 of the 500 seats in parliament and at the regional level, the ANC took control of seven of the nine provincial governments.

“I was 20 when apartheid ended,” said Nelson Nkrsi, who owns a transportation firm here that caters to tourists. “There was so much excitement. We all sat down and thought, ‘Wow! Apartheid has ended, Nelson Mandela is free. We’re all going to be living in the suburbs. We’re all going to be driving really nice cars.’ It was a dream we all had.”

It was a dream deferred, if not erased.

Today, 19 years later, the ANC – the major anti-apartheid group representing the 80 percent Black majority – is still winning elections, but by increasingly smaller margins. Moreover, even some staunch ANC backers are openly questioning whether the group that brought about the fall of apartheid is up to the task of governing successfully.

In an interview earlier this month with the Mail & Guardian, retired Archbishop Desmond Tutu said: “I’m not a card-carrying member of any political party. I have over the years voted for the ANC, but I would very sadly not be able to vote for them after the way things have gone.”

Tutu explained, “We really need a change. The ANC was very good at leading us in the struggle to be free from oppression. They were a good freedom-fighting unit. But it doesn’t seem to me now that a freedom-fighting unit can easily make the transition to becoming a political party.”

South Africa, nearly twice the size of Texas, has a population of 48.6 million. Blacks or Africans make up 79 percent of the population followed by Whites (9.6 percent), Colored (8.9 percent), and Indian/Asian (2.5 percent).

But the euphoria of the Mandela years in the public has faded. 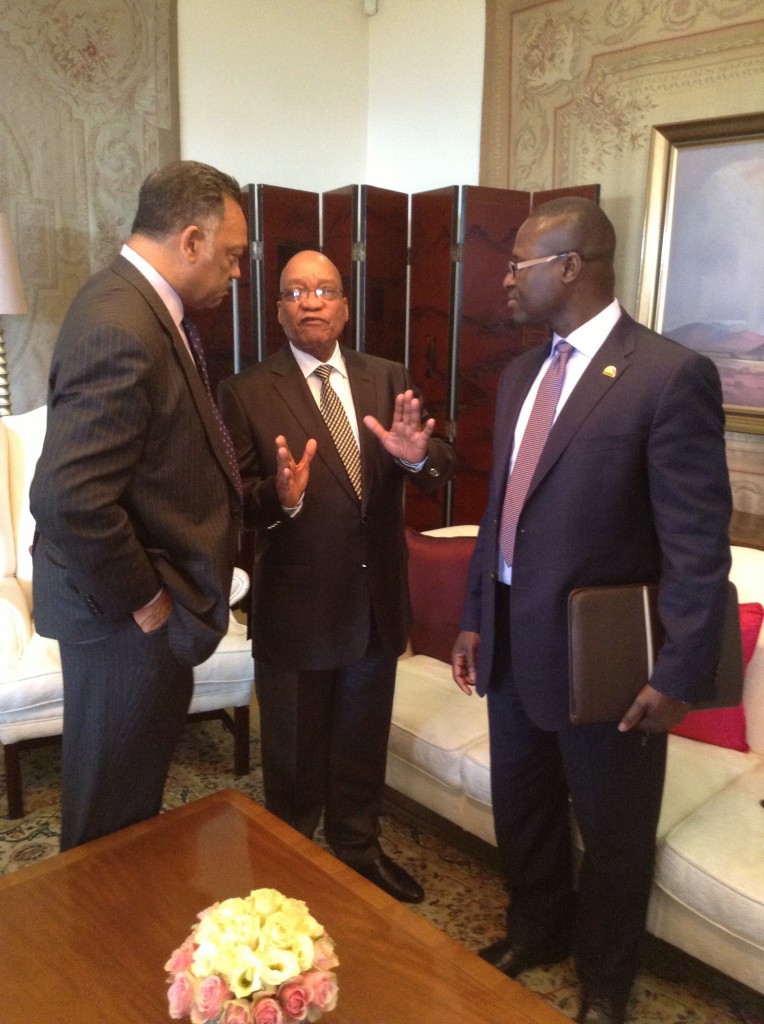 Kenneth Walker, a former White House correspondent for ABC News who now lives in Johannesburg, said much of the disappointment with President Jacob Zuma can be traced to the negotiations that led to a peaceful transition from White minority-rule to a democracy.

During the transition, Whites – representing only 16 percent of the population – had disproportionate representation in government and were not forced to make the kind of land concessions White farmers experienced in Zimbabwe.

“The ANC cut a bad deal,” Walker said. “When the farm seizures started in Zimbabwe, I asked President Mugabe why was it that in the African countries that used to be colonies, Africans controlled the governments, but the economies were still largely controlled by Whites. He said, ‘We thought once we got the government, everything else would follow. We were wrong.’ By the time the ANC cut its deal, this model was well known and thoroughly discredited; yet the ANC settled for it anyway. Basically, they accepted the government and pretty much agreed that apartheid would continue to rein everywhere else – the economy, access to health care, education and decent housing.”

A report last October by Statistics South Africa painted a mixed picture of South Africa. Over the past decade, annual earnings of Black households increased by 169 percent to 60,613 rand (approximately U.S. $6,644). White household earnings over that same period rose by 88 percent to 365,134 rand (about U.S. $40,927).

“These figures tell us that at the bottom of the rung is the black majority, who continue to be confronted by deep poverty, unemployment and inequality. Great strides have been made,” President Zuma said. “However, much remains to be done to further improve the livelihoods of our people especially in terms of significant disparities that still exist between the rich and poor.”

Those economic disparities were highlighted last year in a report by the World Bank titled, “South Africa Economic Update: Focus on inequality of opportunity.”

Earlier this month, The Economist noted, “… the gap between rich and poor is now wider than under apartheid.”

South Africa has an official unemployment rate of 25.2 percent – 33 percent if discouraged workers are counted – according to the World Bank.

“… Africa’s population, unlike Asia’s, is growing fast. From 1 billion now it is set to double in little more than a generation,” said The Economist. “A youthful population is a blessing in many ways. But if the extra people cannot find jobs, they may cause unrest and instability. South Africa knows this too well. Joblessness is one reason for high crime rates that make it necessary for rich South Africans to sleep behind heavy barred doors and windows.”

A U.S. State Department report on South Africa observed that although most U.S. tourists travel safely in South Africa, crime is a major concern.

“Criminal activity, such as assault, armed robbery, and theft, is particularly high in areas surrounding certain hotels and public transportation centers, especially in major cities,” the report stated. “Theft of passports and other valuables is most likely to occur at airports, bus terminals, and train stations. A number of U.S. citizens have been mugged or violently attacked on commuter and metro trains, especially between Johannesburg and Pretoria.”

The report said, “South Africa also has the highest reported occurrence of rape in the world.” A country profile by the Central Intelligence Agency (CIA) said South Africa ranks No.1 in the world with the 5.6 million people living with HIV/AIDS. The number of deaths from AIDS – 310,000 in 2009 –  also places South Africa ahead of all other nations.

Jesse Jackson said that anti-apartheid activists in South Africa were so focused on ending rigid segregation in the early 1990s that they didn’t have the luxury of focusing on broader, economic matters.

“What we’re seeing increasingly is Africans are free, but not equal,” he said, ticking off a list of areas that ranged from healthcare to banking.

Still, Jackson said, the “born frees” – those born after apartheid ended in 1994 – will be responsible for addressing remaining issues, such as economic inequality.

Ranjeni Munusamy, one of the top political writers in South Africa, is hopeful about the country’s future – but not under Zuma, who has a year left on his term.

“When Zuma began his presidency, there were high hopes and goodwill for him to succeed in the targets he set,” Munusamy said. “It was neither in the national nor international interests to wish him to fail. When a president fails, the country fails. In the past four years, South Africa has looked on in astonishment as his administration lurched from one crisis to another. Even by his own standards, and in his own mind, Zuma cannot believe that his presidency has been a success.”

Blacks are Still Majority of the Wrongfully Convicted