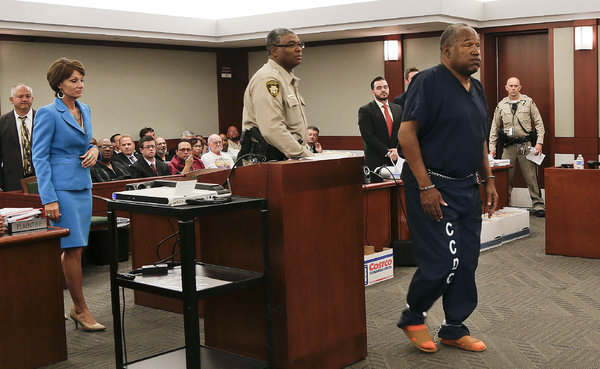 Although O.J. Simpson, right, was acquitted in 1995 in the killings of his wife, Nicole Brown Simpson, and her friend, Ronald Goldman, he later lost a civil suit and was ordered to pay $33.5 million to the estates of Ms. Simpson and Mr. Goldman. (Pool photo by Julie Jacobson/New York Times)

LAS VEGAS — O.J. Simpson, the former football star famously acquitted of murder in 1995, offered sometimes emotional testimony in a packed Las Vegas courtroom on Wednesday as he sought a new trial in a robbery case that sent him to prison nearly five years ago.

Simpson, 65, was brought to court from a Nevada prison and took the witness stand on the third day of a week-long hearing into his claims that his lead defense attorney, Yale Galanter, mishandled his case in a Nevada trial in 2008.

Simpson is serving up to 33 years for his conviction on 12 charges including armed robbery and kidnapping. The charges stemmed from a September 13, 2007, incident in which Simpson and five other men stormed into a room at the Palace Station Hotel and Casino and took thousands of dollars in memorabilia at gunpoint from a pair of sports collectors.

Activist to Hand Out Free Shotguns to Chicago Residents

South Africa: ‘Free but not Equal’