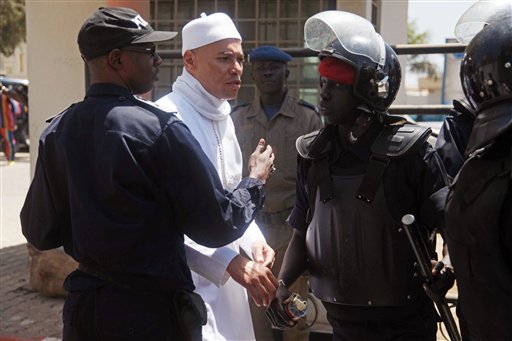 In this Friday, March 15, 2013 file photo, Karim Wade, center, the son of former Senegalese President Abdoulaye Wade, is blocked by police as he tries to approach journalists and gathered supporters outside the office of the special prosecutor investigating him on charges of embezzled funds, in Dakar, Senegal. (AP Photo/File)

DAKAR, Senegal (AP) — The son of Senegal’s former President Abdoulaye Wade lost a bid to be freed from his six-year prison sentence when the Supreme Court rejected an appeal on his conviction.

Karim Wade, who held several high level Cabinet positions in his father’s government, was convicted in March on charges of illegally accumulating a fortune of at least $200 million.

His legal team was not present Thursday, after also boycotting the 2014 trial on the grounds the verdict was determined ahead of time.