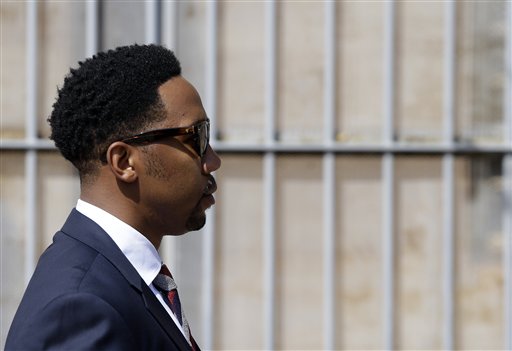 Grandson of former South African president Nelson Mandela, Ndaba Mandela walks out of the magistrates court where his brother Mbuso Mandela is scheduled to appear accused of raping a 15-year-old girl, in Johannesburg, South Africa, Friday, Aug. 21, 2015. The grandson of Nelson Mandela, Mbuso Mandela appeared in court accused of raping a 15-year-old girl, where a judge will decide whether he will be granted bail. (AP Photo/Themba Hadebe)

JOHANNESBURG (AP) — A grandson of Nelson Mandela accused of raping a 15-year-old girl will remain in police custody, while his defense lawyers collect more evidence for a bail hearing, a South African judge ruled on Friday.

Mbuso Mandela’s bail hearing was postponed to Tuesday to give his defense team more time to locate a witness who they say could testify that the incident was consensual, a judge ruled.

The judge in the Johannesburg magistrate’s court also ordered the prosecution to produce the official identity document of the teenager accusing Mbuso Mandela of rape, in order to settle the defense’s dispute that the girl is 16, the age of legal consent in South Africa.

Members of the Mandela family were in the cramped courtroom where Mbuso Mandela, 24, appeared calm as he sat behind his lawyer. He has been in police custody since his arrest last Saturday.

The rape allegedly took place at a restaurant in Greenside, a Johannesburg suburb, on Aug. 7, police said.

S. Sudan Media Switch Off for 24-Hours Over Journo’s Murder