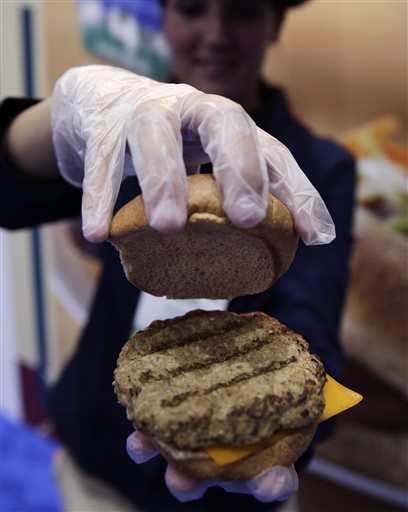 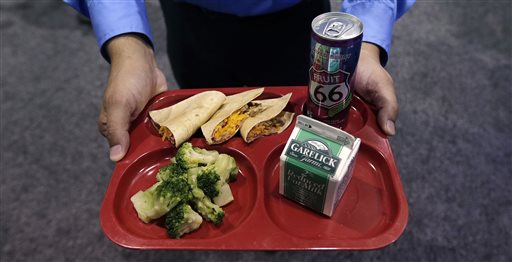 BOSTON (AP) — Bean burgers, peanut butter substitutes and pre-sliced vegetable packets were on the menu Monday as school lunchroom managers from around the country sampled offerings in a hunt for fare that will meet stricter health mandates — without turning off sometimes-finicky students.

“I have my work cut out for me,” said Sara Gasiorowski, who was among the roughly 6,500 people attending a conference for school nutrition professionals at the convention center.

A director of food services for the school district in Wayne Township, Indiana, she was looking for healthy, affordable breakfast options as her district expects higher dairy and produce costs.

This fall, new requirements from the U.S. Department of Agriculture will alter the makeup of school meals, calling for less sodium and more fruits and vegetables. Grain-based foods such as breads, tortillas, crackers and pastas will have to be rich in whole grains. Calorie, fat and sodium limits will be placed on snacks and drinks sold in school vending machines, snack bars and a la carte lines.

Schools must meet the requirements to be reimbursed by the federal government for what they spend on serving free and low-cost meals to low-income students, an important source of income for districts in an era of strapped school budgets.

Part of an effort to fight high childhood obesity levels, the nutritional mandates are being ramped up after first taking effect in 2012. Since then, more than 1 million students have stopped choosing to purchase school lunches, according to the School Nutrition Association. The group also says school cafeterias have wasted nearly $4 million in fruit and vegetables each day, as students end up throwing out foods they are served under the guidelines.

That has left districts searching for foods and recipes that fit the guidelines but are also more appealing to children.

Jackie Morgan, director of food services for Milton Public Schools outside Boston, sought whole-grain pasta for her district’s youngest students, who rejected the administration’s earlier attempts to make a healthier version of a lunchroom staple: macaroni and cheese.

“All of the children walked to the trash barrel and threw it away,” she said, recalling that failed experiment about four years ago.

By midafternoon Monday, she’d covered about a third of the 400 exhibits but had not found a pasta that made the grade.

The school nutrition group, which organized this week’s conference and represents about 55,000 school cafeteria and nutrition professionals, wants Congress to eliminate some of the new standards while keeping others at the same levels first imposed in 2012.

Other school nutrition experts said they were searching for foods that would be safe for the majority of children as more and more report nut and other allergies.

She said she discovered the paste, which tastes and looks like peanut butter but is not quite as sweet or viscous, at a previous conference. After bringing it to a panel of students for their approval, Ronnei says her district now uses it in sandwiches in place of peanut butter.

Study: US Alzheimer’s Rate Seems to be Dropping