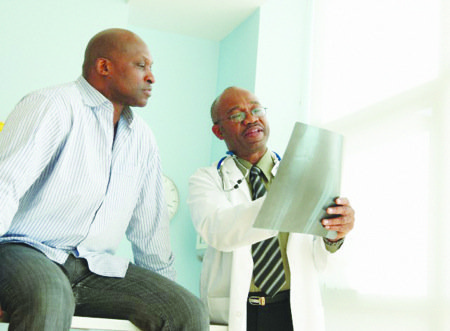 Despite advances made by the Affordable Care Act, which requires that everyone in the United States obtain health insurance, African-American males and Latinos still represent the highest proportion of the uninsured population in the country. (Courtesy photo)

by Stacy M. Brown
Special to the NNPA from The Washington Informer

Randy Wheeling, Curtis Washington and Frankie Rossi each signed up for health insurance under the Affordable Care Act.

For Wheeling, a cable technician who lives in Northeast, signing up meant that he could finally breathe easier when making appointments with a primary care physician.

Washington, an automobile mechanic who also lives in Northeast, said his new insurance represents the first time that he isn’t being covered by his spouse or parents. “It’s a little bit of freedom,” said the 29 year old.

Rossi, who lives in Northwest, said the new policy he received by signing up through the federal health care exchange, provided him with a fresh perspective.

“It gives me hope that someone in a position of power does care about minorities,” said Rossi, 37.

Despite the positive experiences of the three men and the advances made by the Affordable Care Act (ACA), African-Americans and Latinos still represent the largest portion of the country’s uninsured population.

A June 30 report by the Office of Minority Health at the U.S. Department of Health and Human Services in Rockville, Maryland, examined the characteristics of uninsured adult males by race and ethnicity, using the most recent data from the 2012 American Community Survey.

The report revealed that, among uninsured adult males ages 19-34, Latino and African-American males counted among the highest group without health care.

“The Affordable Care Act is one of the most significant laws to help reduce disparities in health and access to care. During the first historic open enrollment period, minority men, many who may have previously been locked out of the health insurance market because of a pre-existing condition or  simply because of its unaffordability, were able to obtain health care coverage and will now have the security that health insurance provides,” Gracia said.

“Thanks to the ACA, millions of minorities are seeing the benefits and are now able to access preventive services at no additional cost. Furthermore, the ACA is addressing disparities among minority communities by increasing the number of community health centers and the services they offer which serve as safety nets for the most vulnerable and underserved, where nearly two out of three patients served in community health centers are racial and ethnic minorities,” she said.

The U.S. has one of the most expensive health care systems in the world, yet the life expectancy and infant mortality rates are often middle of the road at best, said Dr. Jean J.E. Bonhomme, founder of the National Black Men’s Health Network based in Atlanta.

While data shows disparities among uninsured males, progress has been made in increasing access to health care coverage, officials said.

Over the course of the first Health Insurance Marketplace enrollment period, more than 8 million people signed up as part of the ACA.