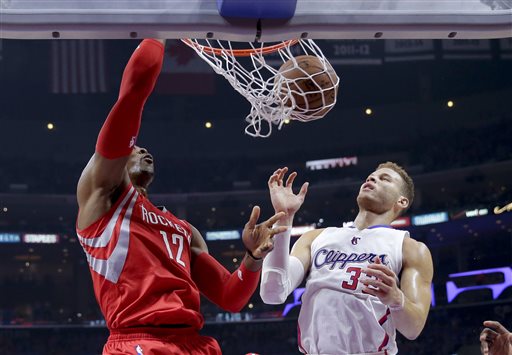 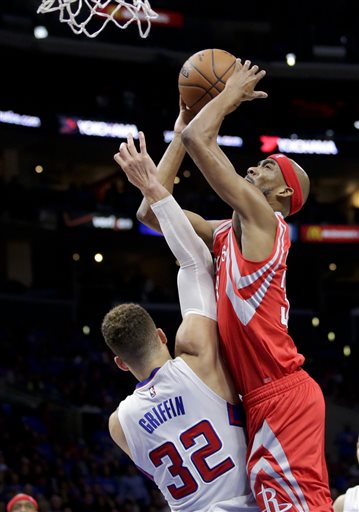 LOS ANGELES (AP) — With a 19-point lead in the second half, the Los Angeles Clippers were cruising toward clinching the franchise’s first Western Conference finals berth.

The Houston Rockets would not be denied.

Corey Brewer scored 15 of his 19 points in the fourth quarter and Houston stunned Los Angeles 119-107 on Thursday night to force a Game 7.

“We kept saying, ‘We’re not going to quit,'” said Dwight Howard, who had 20 points and 21 rebounds. “We kept believing. We never gave up on each other.”

James Harden scored 23 points — making all 11 of his free throws — while spending most of the fourth quarter on the bench for the Rockets, who have won two straight after trailing the series 3-1. Josh Smith scored 14 of his 19 points in the fourth.

Trailing 87-68, Houston outscored the Clippers 51-20 over the end of the third and in the fourth to shock the sellout crowd of 19,417 into near silence.

“We took our foot off the gas, stopped defending, a lot of things,” said Blake Griffin, who finished with 28 points and missed all five of his shots in the fourth quarter when the Clippers were 4 of 22 from the field.

Game 7 is Sunday in Houston.

“It’s about who wants it more,” Griffin said.

The Clippers led by 19 points in the third quarter, seemingly assured of finishing off the Rockets in six games after beating the defending NBA champion San Antonio Spurs in seven games in the first round.

Then Rockets started their big run with nine straight points to cut it to 13 heading into the fourth.

“We were trying to run the clock out and we stopped playing,” Clippers coach Doc Rivers said. “We gave this one away.”

Houston hit seven 3-pointers in the fourth and stymied the Clippers offensively.

“That group just went out there and they just scrambled, they fought and they played their tails off on defense,” Rockets coach Kevin McHale said. “They had a great sense about them that they were going to accomplish something.”

Chris Paul had 31 points and 11 assists for the Clippers and J.J. Redick added 15 points.

Once again in the series, the third quarter belonged to the Clippers, who outscored the Rockets 28-17 while building that 19-point lead.

The Rockets’ frustration boiled over in the third, when Howard was called for a flagrant-1 foul after knocking Griffin to the court on a drive. Harden later got hit with a technical for shoving Griffin.

Griffin ignited the crowd with a fastbreak layup in which he first completed a 360-degree pirouette, extending the lead to 86-68. The franchise’s long-suffering fans stood clapping and cheering as the Clippers got defensive stops that turned into baskets on their own end.

“We were just riding our momentum,” Smith said.

Neither team led by more than nine points in the first half. The Clippers dominated the first quarter, when Howard picked up two early fouls. Harden revived the Rockets by scoring 17 points in the second, including 11 straight against the Clippers’ reserves. Once the starters returned, Griffin and Redick combined to score nine straight and put the Clippers ahead 64-62 at halftime.

Rockets: They dominated the boards 60-41. … Harden started the game 0 of 5 from the field.

After playing every other day, the teams have two days’ rest before Game 7.

“I’m almost 30, so I need two days to get my body right,” Howard said. “It’s going to be a dogfight.”
Copyright 2015 The Associated Press. All rights reserved. This material may not be published, broadcast, rewritten or redistributed.

Cavaliers Push Through Injuries on Path to Eastern Finals