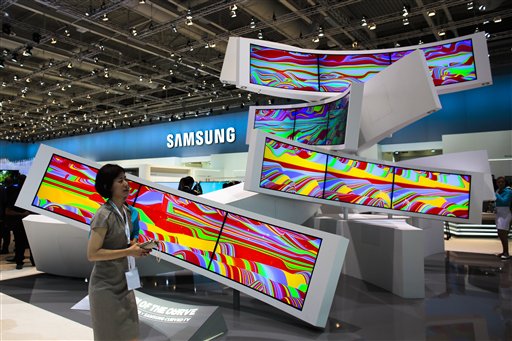 This is a Friday, Sept. 5, 2014 file photo of a woman as she passes an installation with curved screens, displayed by Samsung at the consumer electronic fair IFA in Berlin, Germany. (AP Photo/Markus Schreiber)

A report by German security firm G DATA found that the samples containing such malware had increased by 25 percent in the second quarter compared with the first three months of the year.

The company’s 10th such report, released Wednesday, found that analysts could identify a new strain of malware every 14 seconds.

It says some phones by manufacturers such as Huawei and Xiaomi contain modified apps designed to spy on users or display advertising.

G DATA spokesman Christian Lueg says the phones appear to have been installed by middlemen, but in tracing the source “we lost the trail in China.”

Users can detect the malware with free software.

How to Get the Best Deal on Your iPhone Trade-In