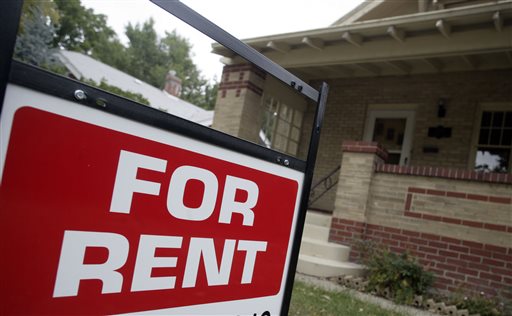 WASHINGTON (AP) — U.S. home rental prices rose at a steady rate in January, but prices barely budged or even dipped in parts of the Midwest and Mid-Atlantic.

Real estate data firm Zillow said Friday that prices increased a seasonally adjusted 3.3 percent in January compared with 12 months earlier. But some major cities are finding themselves with an excessive supply of apartments and houses, reducing price pressures for renters.

In the wake of the Great Recession, more Americans are shifting away from home ownership, often because their low-incomes make it difficult to save for a down payment or they live in cities with expensive housing.

The homeownership rate slipped to 64 percent at the end of 2014, the lowest level in two decades, according to the Census Bureau. Some of that decline also reflects the ravages from the housing bust that triggered the recession in late 2007, as foreclosures and overbuilding left plenty of empty houses.

Still, builders have started to respond to the greater demand as the job market improves and more millennials seek apartments. Over the past 12 months, there has been a 24.5 percent increase in groundbreakings for apartment complexes, according to a separate Census report released this week.

As more apartments come on the market, price pressures should ease for renters, said Svenja Gudell, director of economic research at Zillow. Modest increases or slight declines should help improve affordability, making it easier for renters to eventually transition to home ownership.

The additional supply is already evident in a few key markets.

Zillow reported that rents have fallen 0.5 percent in the Chicago area and 0.3 percent in Minneapolis over the past year.

“Chicago did a whole lot of overbuilding during the housing boom,” Gudell said, noting that some select downtown neighborhoods in the Windy City still have prices rising at or above the national average.

Dann Wunderlich, 24, lives with his fiancee in a “spacious” one-bedroom apartment in Chicago’s Buena Park neighborhood. Together, they pay $1,050 a month, well below what Wunderlich says he was paying in 2011 for an apartment elsewhere in the city.

“People in our area move year to year because they’re consistently finding a better price,” Wunderlich said. “I know that’s what we did until we found this apartment. If we found a better apartment with a cheaper rent, we would move.”

Similarly, construction has been making more apartments available around Baltimore and Washington, where rental prices rose 1.5 percent and 1.3 percent, respectively. A separate report by the rental marketplace Apartment List found that rents for a two-bedroom apartment in metro Washington were averaging $1,990 a month, up just 0.1 percent over the past year.

Other parts of the country are experiencing a rental boom.

AP Writer Hannah Cushman contributed to this report from Chicago.

As the Rich Get Richer, Unions Are Poised for Comeback