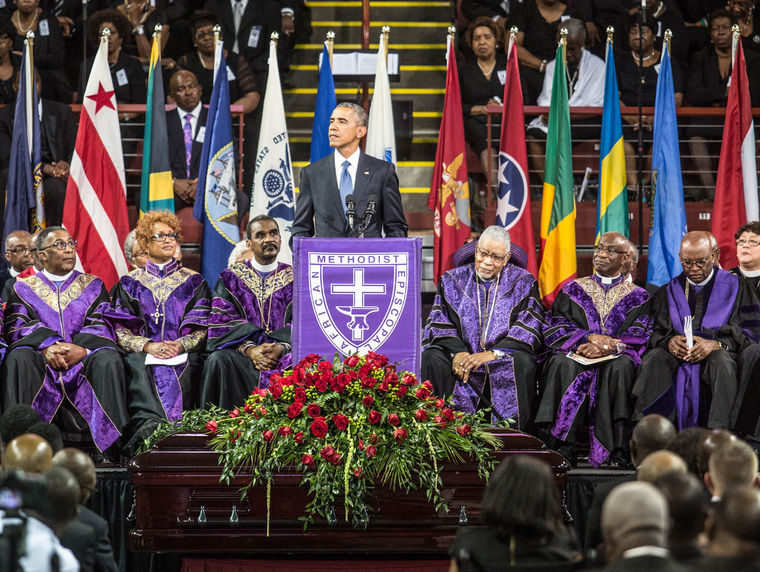 by Kenya Vaughn
Special to the NNPA from the St. Louis American

Rev. Clementa Pinckney paid the ultimate price when a stranger was allowed to stranger join him and about a dozen others for bible study at Charleston’s historic Emanuel African Methodist Episcopal Church two weeks ago.

Pinckney, a South Carolina State Senator in addition to serving as senior pastor of “Mother Emanuel”, was mourned by the thousands who packed into Charleston’s TD arena and millions via television and live stream on Friday.

“His last act was to open his doors to someone he didn’t know, he didn’t understand and who didn’t look like him,” Scott said. “Let’s not close the doors that Senator Pinckney gave his life to open.”

The service stretched from late morning to mid-afternoon as nearly a dozen came to bid farewell to the leader of “Mother Emanuel” through remarks and reflections, culminated by a soul-stirring eulogy delivered by President Barack Obama.

By eulogy’s end –members of the clergy endearingly referred to him as “Reverend Obama” after he lifted the audience not only through words, but by a surprising impromptu rendition of “Amazing Grace” that compelled clergy, the massive choir and mourners to join in.

Just like the church and Charleston community echoed in the wake of the tragic mass shooting that killed nine faithful members, Pinckney’s home going would echo the theme of forgiveness and the “amazing” grace that moved President Obama to song.

“The alleged killer was so filled with hate,” Obama said. “He failed to comprehend what Rev. Pinckney so clearly understood – the power of God’s grace. Blinded by hatred, the alleged killer couldn’t see the grace surrounded by Rev. Pinckney and others. But God works in mysterious ways. God has different ideas. He [Roof] didn’t know that he was being used by God.”

Rev. Pinckney and then Senator Obama met during his 2008 presidential campaign. He is also a practicing member of the African Methodist Episcopal Church – and offered a bit of insight on how Re. Pinckney was able to seamlessly merge his ministerial calling along with his political work.

“Our calling is not just within the walls of the congregation, but life and the community in which our church resides,” Obama said of the oldest historically black religious denomination in the Western Hemisphere.

In his thirty minute eulogy, President Obama managed to touch upon the issues of racism, gun violence and the confederate flag debate. All became hot topics in the wake of the tragic shooting that suspect Dylan Roof reportedly confessed to police said was orchestrated to spark a race war.

“By taking down that flag, we express god’s grace. But I don’t think God wants us to stop there,” President Obama said. “Perhaps this tragedy will cause us to answer some tough questions – cause us to examine what we are doing to cause our children to hate. Maybe we now realize how racial bias can infect us- how we’ll call Johnny back for a job interview, but not Jamal.”

President Obama praised the families of the victims, the city of Charleston and the state of South Carolina for their reaction to the tragedy. In particular, he pointed out the spirit of forgiveness and compassion expressed by the family and the greater “Mother Emanuel” church family and the progressive action by Governor Haley in her efforts to get the Confederate flag removed.

He talked about the legacy of hatred that has managed to survive not only in the south, but all across the nation –and how Rev. Pinckney tireless efforts to eradicate its lingering aftermath.

“Clem understood that justice grows out of recognition of ourselves in each other – and that you being free means me too,” President Obama said. “I believe it would be a betrayal against everything Rev. Pinckney has stood for if we go back to a place of business as usual.”

He encouraged mourners to take note from Rev. Pinckney’s life and implement grace in working towards building a truly united America.

“This whole week I’ve been reflecting on this this thing called grace,” Obama said. “Clem knew that the path of grace involves an open mind – but more importantly an open heart. If we can find that grace, anything is possible. If we can tap that grace everything can change.”

Removing Flag May Get Done, But Not Now