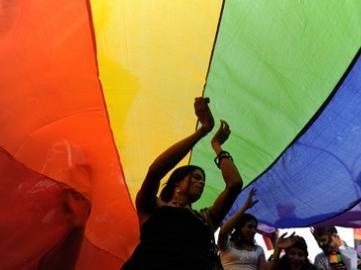 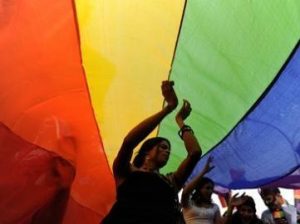 Proponents of same-sex marriage celebrated another victory with the Supreme Court’s June 26 ruling that parts of the Defense of Marriage Act were unconstitutional.

Married lesbian, bisexual, gay, and transgender Americans will now enjoy the same federal benefits as heterosexual couples, including the ability to file taxes together and add each other to health plans, along with other rights that were previously denied to those outside traditional unions.

The 5-4 decision was lauded not only by those in same-sex unions, but by families of gay and lesbian citizens as well.

“It’s peace of mind, as a mom,” said Pat English, a member of the Baltimore section of PFLAG, or Parents, Families, and Friends of Lesbian, Gay, Bisexual, and Transgender Persons.

English joined PFLAG over 10 years ago to support her gay African-American son.

“It gives him the opportunity to have the same benefits as every other heterosexual couple,” English said. “This is justice for everybody and it’s about time.”

The ruling in United States v. Windsor is rooted in a New York legal battle initiated when Edith Schlain Windsor, now 84, was forced to pay excessive estate taxes on a property left to her by her deceased partner, Thea Clara Spyer.

The two were hitched lawfully in a 2007 Ontario, Canada wedding—a marriage their state of residency, New York, recognized at the time. However, when Spyer died in 2009, the state still did not consider the two legal “spouses” because both were women and not covered by the federal definition.

This meant that Windsor would have to pay a larger amount of estate taxes if she wanted the property. The price-tag to claim what had already been willed to her, according to Supreme Court documents, was $363,053.

She paid the sum and then demanded a refund—and a change in the legal definition of the term “spouse.”

“DOMA undermines both the public and private significance of state sanctioned same-sex marriages; for it tells those couples, and all the world, that their otherwise valid marriages are unworthy of federal recognition,” read the majority opinion, delivered by Justice Anthony Kennedy. “This places same-sex couples in an unstable position of being in a second-tier marriage.”

“This case is about power in several respects,” said Scalia. “It is about the power of our people to govern themselves, and the power of this Court to pronounce the law. We have no power to decide this case. And even if we did, we have no power under the Constitution to invalidate this democratically adopted legislation.”

Pastors across the country also disagreed.

“We are devastated that the Supreme Court succumbed to political pressure by voting to weaken the sacred institution,” the Rev. William Owens, President of the Coalition of African American Pastors, said in a statement. “They neglected our most precious children who need a mother and a father united in marriage for healthy development.”

Other organizations across the country which are fighting for LGBT equality rejoiced.

“Today’s decision is historic and a monumental step forward for lesbian and gay families in the United States and full equality,” David Rocah, senior staff attorney for the American Civil Liberties Union of Maryland, said hours after the decision was handed down. “For lesbian and gay families in the 12 states where they are allowed to marry, it finally gives them the full measure of equality that the Constitution guarantees, it is hugely significant.”

Rocah said that more than 1,100 rights now available to same-sex couples affect everything “from taxes to where you’re buried, criminal laws, and social security benefits and programs and insurance.”

“There’s hardly an area of life not touched by the laws governing marriage and the rights and responsibilities that flow from it,” he said. “It’s not the end of the line, there is still a lot of work to be done in states that do not recognize the full equality of lesbian and gay citizens.”

The ACLU of Maryland has set aside $10 million to support efforts to invalidate laws against same-sex marriages elsewhere in the U.S.

Post Views: 18
Related Topics:Defense of Marriage ActDOMAParents Families and Friends of Lesbian Gay Bisexual and Transgender PersonsPFLAGsupreme court
Up Next