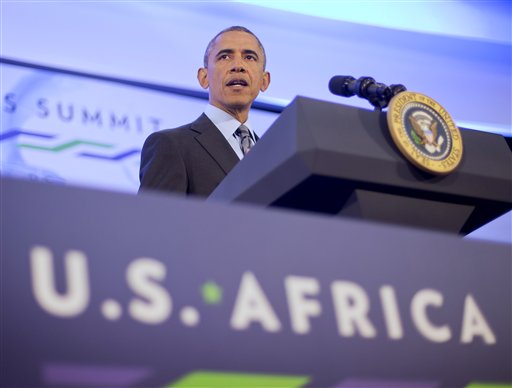 President Barack Obama listens to a question during his news conference at US African Leaders Summit, Wednesday, Aug. 6, 2014 at the State Department in Washington. (AP Photo/Pablo Martinez Monsivais)

WASHINGTON (NNPA) – President Obama showed a deeply personal side of him rarely seen in public as he toasted African leaders at a State Dinner at the White House at the recently-concluded U.S.-Africa Summit in Washington.

“Tonight we are making history, and it’s an honor to have all of you here,” he said on Aug. 5. “And I stand before you as the president of the United States and a proud American. I also stand before you as the son of a man from Africa. The blood of Africa runs through our family. And so for us, the bonds between our countries, our continents, are deeply personal.”

It was precisely because of those special bonds that Africans and African Americans had such high –some say unrealistic – expectations of what Obama would do for Africa when he was first elected president in 2008.

Now those expectations have faded with the passage of time.

Since his election, Obama has made only two trips to Africa, not counting his brief trip to Johannesburg in December 2013 to attend a memorial service following the death of Nelson Mandela. His first trip as president was July 10-11, 2009 to Ghana, where he met with the president, addressed the Ghanaian Parliament and toured Cape Coast Castle, where enslaved Africans were kept before being taken to the West.

He took a three-nation trip June 26-July 2, 2013, visiting Senegal, where he toured Goree Island; South Africa and Tanzania.
Obama visited Kenya, his father’s place of birth, prior to assuming office.

As Obama noted in his toast to African leaders, “Of all the incredible moments of our trips to Africa, one of the most memorable was being able to bring Michelle, and later our little girls, to my father’s hometown in Kenya, where we were embraced by so many relatives.

“We’ve walked the steps of a painful past – in Ghana, at Cape Coast Castle; in Senegal, at Gorée Island – standing with our daughters in those doors of no return through which so many Africans passed in chains. We’ll never forget bringing our daughters to Robben Island, to the cell from which Madiba showed the unconquerable strength and dignity of an African heart. We’ve been inspired by Africans – ordinary Africans doing extraordinary things…”

With slightly more than two years left in his two-term presidency, scholars and activists are already debating what will be the African legacy of the first African American elected president of the United States.

The legacies of Obama’s two immediate predecessors on the continent are clear. Although, by his own admission, Bill Clinton should have done more to end the Rwandan genocide, fight the AIDS epidemic and end famine and war in Somalia, his legacy is the passage and signing of the African Growth and Opportunity Act – AGOA – into law in 2000.

AGOA was designed to help economies in sub-Saharan Africa develop stronger economic ties with the U.S. It does that by providing trade preferences for certain goods to enter the U.S. duty free, including textiles. The law, renewed once since passage, is up for renewal again in 2015.

It is universally agreed that George W. Bush’s African legacy is what he did to curb HIV/AIDS in Africa.

A White House fact sheet noted, “President Bush has made a historic commitment to the fight against global HIV/AIDS. In his 2003 State of the Union Address, President Bush announced the President’s Emergency Plan for AIDS Relief (PEPFAR) to combat global HIV/AIDS. Later that year, President Bush signed the initial 5-year, $15 billion authorizing legislation that had been approved with strong bipartisan support. This President views this commitment as a central part of our foreign policy to help alleviate the despair that allows extremism to take hold.

“PEPFAR is the largest international health initiative in history to fight a single disease. This effort has helped bring life-saving treatment to more than 2.1 million people and care for more than 10 million people – including more than four million orphans and vulnerable children – around the world.”
What is Obama’s signature contribution to Africa?

He explained, “When he [Obama] was a senator, he introduced legislation in connection with the Great Lakes Region, peacekeeping and economic development. In the six years he has been in office, I’ve seen no evidence of any kind of U.S. effort to engage in peace and reconciliation.

“For example, the U.S. should be trying to resolve Moroccan occupation of the Western Sahara. But there are no special envoys working in the Great Lakes Region. The U.S. ignores the corruption of Equatorial Guinea. The response to the Nigerian Boko Haram crisis ends up being basically military and very little else. So, I don’t feel there’s anything particularly innovative in Obama’s approach toward the continent.”

“His biggest legacy is going to be these young African leaders initiative,” a reference to a pre-summit gathering here hosted by Obama. “You can’t stop them. They are the powers to be in their own countries.

Foote and Fletcher agree that Africa’s problems extend beyond the need for additional U.S. trade.

Africa has the youngest population in the world, with nearly 200 million people between the ages of 15 and 24. In most African countries, that group makes up more than 20 percent of the total population, according to the African Development Bank. By 2045, the number of young people is expected to double.
With those growing numbers comes the challenge of providing a sufficient number of jobs.

As a Brookings report explained, “Young people find work, but not in places that pay good wages, develop skills or provide a measure of job security. With the exceptions of Botswana, Nigeria and South Africa—all of which have alarmingly high youth unemployment rates—less than one-fifth of Africa’s young workers find wage employment. Over 70 percent of youth in the Republic of the Congo, the Democratic Republic of the Congo, Ethiopia, Ghana, Malawi, Mali, Rwanda, Senegal and Uganda are either self-employed or contributing to family work.”

The Brookings study notes there is also an education crisis.

“In the midst of an increasingly knowledge-based global economy, 30 million primary school-age children in Africa – one in every four – are out of school, along with 20 million adolescents,” the report stated. “…Many of Africa’s children are denied an education because they are working as child laborers.”

The continent has other pressing issues as well, including the need for more energy.

Another Brookings study, titled, “Top Five Reasons Why Africa Should Be a Priority for the United States,” observed: “The International Energy Agency (IEA) estimates that there are 590 million people in sub-Saharan Africa, mostly in rural areas, without access to electricity, representing nearly 6 in 10 people in the region. In addition, 700 million people, or 70 percent of the population, rely on traditional, non-commercial sources of energy, such as biomass, for cooking.”

In his speech to African leaders, Obama acknowledged that even with Africa’s challenges, it is a continent on the rise.

He said, “Even as Africa continues to face enormous challenges, even as too many Africans still endure poverty and conflict, hunger and disease, even as we work together to meet those challenges, we cannot lose sight of the new Africa that’s emerging.”

Zimbabwe President Says Not to Mess with Family

U.S. Climbs to Third in Ranking of World’s Most Competitive Economies