Zimbabwe President Says Not to Mess with Family
Advertisement 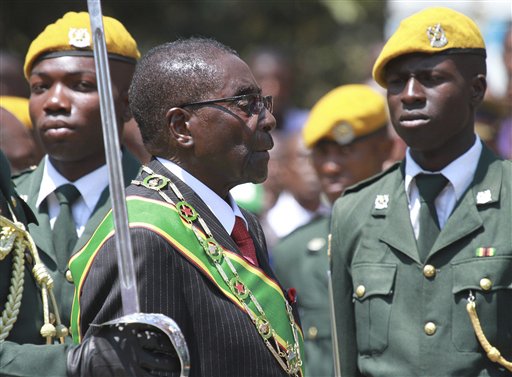 In this file photo taken Tuesday, Sept. 17, 2013 Zimbabwean President Robert Mugabe inspects the guard of honor during the opening of the first session of the eighth Parliament of Zimbabwe in Harare. (AP Photo/Tsvangirayi Mukwazhi)

HARARE, Zimbabwe (AP) — Zimbabwe’s president warned against messing with his family, amid a heated debate within the ruling party about his wife’s entry into politics.

“I heard that someone tasked my nephew to tell Mrs. Mugabe to leave Harare. Where do you want her to go?” Mugabe told hundreds of cheering youths bussed to the Harare International Airport to welcome him back from a visit to China. “We don’t want such arrogance.”

Mugabe was referring to claims by his nephew and ZANU-PF politician Patrick Zhuwawo that some party members unhappy with Grace’s rising political profile had asked him to find an alternative “political home” for her other than the capital, Harare.

The ZANU-PF Women’s League said they hope Mrs. Mugabe can advance women’s issues and help heal factionalism because she has “the president’s ear.” Her 90-year-old husband will have to approve her nomination in December during the party congress.

Mugabe, who has ruled since 1980 and won re-election in a disputed poll in July 2013, has already accepted a proposal by the women’s wing to be the party’s candidate for the 2018 election. He will be 94 by then. Politicians have been jockeying for position to succeed him.

Mugabe was in China seeking support for his country’s struggling economy.

The government has cut forecasts of economic growth for 2014 by half to 3.1 percent; the World Bank predicts economic growth of only 2 percent. Hundreds of companies have closed in the past year. Tens of thousands of Zimbabweans have fled economic hardships in recent years, settling mainly in former colonial power Britain and neighboring South Africa.

Miscommunication Blamed for Deadly US Mistake