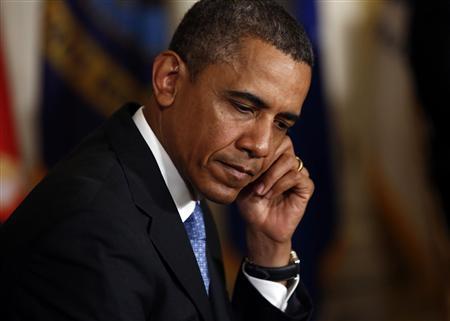 U.S. President Barack Obama is pictured as first lady Michelle Obama (not pictured) speaks during an event on finding employment for military veterans who have returned from service, in the East Room of the White House in Washington, April 30, 2013. REUTERS/Jason Reed

(Reuters) – With his fight for tighter gun control measures defeated and prospects for a deficit reduction pact dim, President Barack Obama sought on Tuesday to project an image of a leader still in control of a faltering domestic policy agenda.

At a surprise news conference, Obama made the case that recent defeats did not mean he was a lame-duck leader, and said he was hopeful immigration reform would become law.

“As Mark Twain said, you know, rumors of my demise may be a little exaggerated,” the president told reporters at the White House when asked whether he had “the juice” to push his policy priorities through Congress.