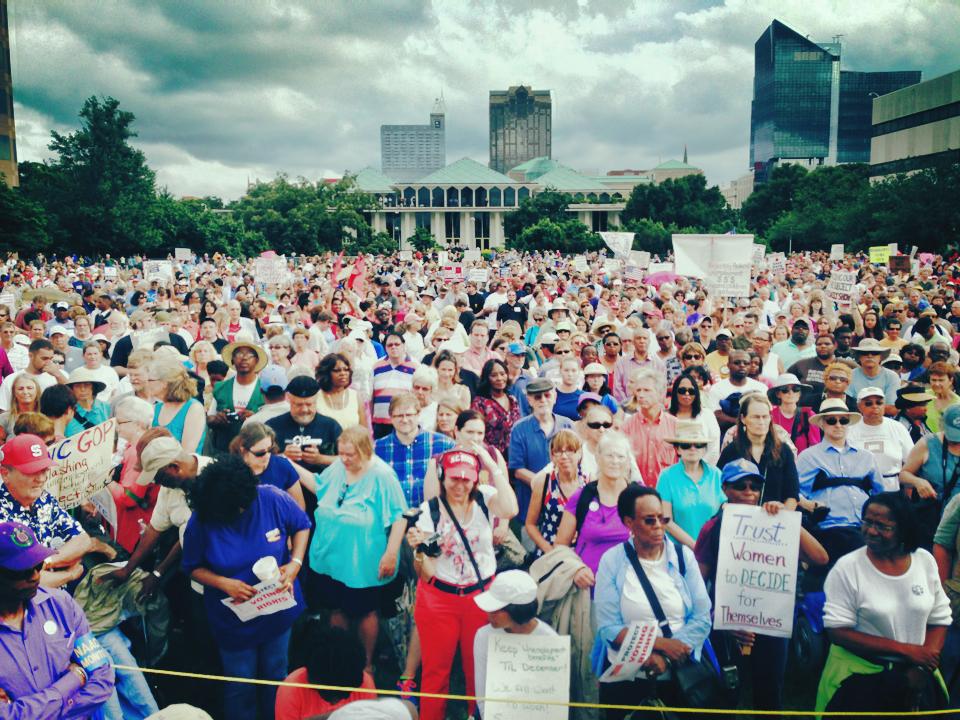 Thousands from across the state of North Carolina have been attending the North Carolina NAACP-led “Moral Monday demonstrations at the Republican N.C. Legislative Building in Raleigh every Monday since April 29th. With more than 700 arrested thus far, the protesters demonstrate against increasingly regressive policies, they say, that hurt the poor and the unemployed. [Photo by Rob Stephens]

By Cash Michaels
Special to the NNPA from the Wilmington Journal

RALEIGH, N.C. (NNPA) – A month before the 50th anniversary of the historic 1963 March on Washington, often viewed as the defining moment of the 1960s Civil Rights Movement for freedom, justice and equality, modern-day civil rights leaders are mobilizing again.

But this time, the strategy to combat the systematic rollback of hard-earned civil and human rights, though national in nature, is being played out on a state-by-state basis.

Leading the way in that effort is Rev. William Barber, president of the North Carolina NAACP. For 10 straight Mondays, beginning April 29, Rev. Barber and his multi-racial, multi-generational progressive coalition partners have conducted massive “Moral Monday” demonstrations at the North Carolina Legislative Building. Thousands of people from across the state, more than half of them White, have religiously come to Raleigh to loudly, but nonviolently protest what they call the “regressive” policies of the Republican-led North Carolina General Assembly, policies that have cut tens of thousands off from unemployment benefits, and prevented hundreds of thousands from receiving Medicaid funds.

Last week, North Carolina made national headlines again when the state Senate combined a bill outlawing Muslim Sharia law with a measure severely restricting abortion access, passing it without notice or public hearings. Hundreds of women, outraged by the late night vote, converged on the legislature the following day, shouting “Shame on you.” The bill is a product of the Legislature’s Christian conservative extremists.

It’s been no secret since the Republicans took over North Carolina’s General Assembly and governor’s office in the 2012 elections that it would take a massive statewide movement to counter their conservative agenda.

Enter the North Carolina NAACP and Moral Mondays. Thus far, the demonstrations have put mounting pressure on the GOP majority. Their goal – to hold Gov. Pat McCrory and the GOP leadership accountable for their policies by having citizens arrested during the demonstrations – right now numbering more than 700.

Rev. Barber says the success of “Moral Mondays” means North Carolina is the test tube for a new national progressive movement against conservative policies that must be fought state-by-state by homegrown leaders.

“These fights are now state fights, and that’s the dynamic,” Rev. Barber explains.  “The fight has to be getting legal and other resources into the states, because that’s where the litigation is going to [happen].”

Indeed, Moral Mondays have brought about a resurgence of social activism that has reunited veteran Black and White ‘60s and ‘70s activists, and joined them with younger activists, in addition to clergy, elected officials, and grassroots leadership – all committed to not allowing the conservative majority to fatally cripple the social fabric of the state.

While Gov. McCrory calls them “unlawful” demonstrations by “outsiders,” and GOP legislative leaders dismiss the protesters with terms such as “morons,” the ultimate goal of the Moral Monday movement is 2014, and the all-important statewide midterm elections when a riled up electorate can turn the Republican majority out.

Unless the courts overturn the 2011 Republican redistricting maps, which locked the GOP majority in the state House and Senate in so-called “bulletproof” conservative-leaning voting districts for at least the next 10 years, giving the Democrats back the N.C. General Assembly next year is a tall order. But the nonpartisan Moral Monday movement’s statewide reach of voter registration and empowerment is doing all it can to show even Republican voters that the majority they’ve put into office is not working in their best interests.

For Rev. Barber, watching the Legislature turn the progressive clock back by recently repealing the Racial Justice Act (a law which challenged racially-biased death sentences); threatening to curtail same-day voter registration and “Souls to the Polls” Sunday voting; and slashing the social safety net so that the unemployed and the poor are left to their own devices; is a moral and social outrage that Barber says God’s Word commands him to fight hard against.

“You have to have an agenda for the state – if you’re going to change the nation, you have to think states – that is coalition driven and agenda-based. That is rooted in anti-racism, anti-poverty, pro-justice values. That has a deep moral center and is infused and informed with the best information and analysis of public policy, and what we’re facing,” Rev. Barber says.

Moral Mondays grew out of several strategies to include legal, voter education, and the use of social media, Barber continued. The movement leaders tried to engage Republican leaders in respectful dialogue, but when it became clear that the GOP would not relent in their “extremist” policies, Rev. Barber says “direct action,” namely the growing Monday, and now Wednesday afternoon demonstrations, was then needed.

“We were willing to put our lives and bodies on the lines, which is why you see over 700 people arrested,” Rev. Barber says, adding that they don’t go to get arrested, but rather exercise their state Constitutional right to “instruct” their elected representatives. “This crowd [in the GOP-led General Assembly] refuses to be instructed,” Rev. Barber says.

He calls the principles of Gov. McCrory, House Speaker Thom Tillis and Senate leader Phil Berger “…deeply immoral, extreme and undemocratic.” The Moral Monday movement must remain engaged and committed long after the General Assembly ends its session in a few weeks, he says, in order to make the change that is needed in 2014.

Barber adds that given the recent vote of the US Supreme Court to strike down Section 4 of the 1965 Voting Rights, thus leaving it up to a deeply divided GOP-led Congress to come up with new criteria by which the U.S. Justice Department can continue to safeguard Black voting rights, organizing to ensure a massive voter turnout in 2014 is even more essential so that the right representation is elected to make the needed change.

“The 2014 elections are more important now than ever before, because the balance of power is going to have to be shifted in order for the rights we fought, died and bled for to be enforced,” Rev. Barber said.  “They don’t want people to vote, because a broad electorate undermines their narrow agenda.”