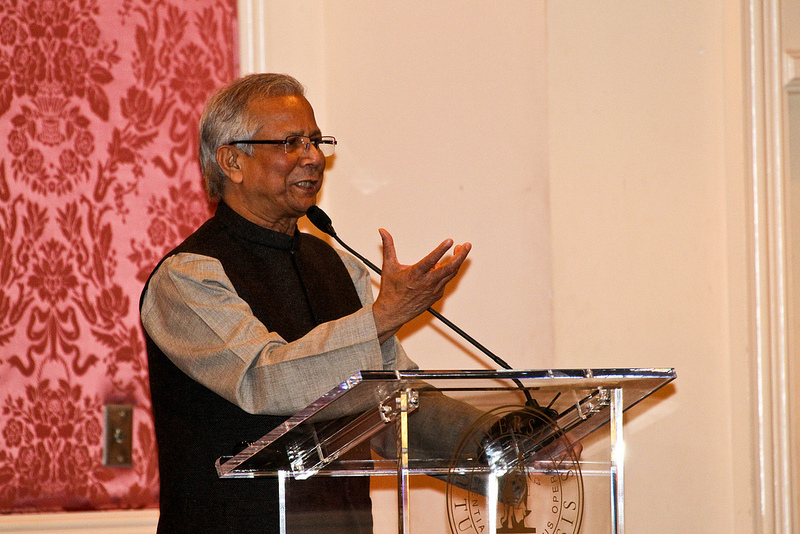 TUSKEGEE, Ala. (January 21, 2013) – College students from around the State of Alabama gathered at the Tuskegee University to offer their solutions to some of the area’s most pressing social and economic problems. The Alabama Social Business Forum, held Jan. 18 at the Kellogg Hotel and Conference Center at Tuskegee University, encouraged the students to formulate viable business plans using social business concepts such as those defined by the founder of the Grameen Bank and 2006 Nobel Prize winner, Muhammad Yunus, who was also the keynote speaker for the event.  Social businesses hope to solve a community problem such as poverty, hunger or joblessness may generate a small profit, but their objectives are not solely financial.

One Tuskegee team chose a novel approach to tackle the nationwide problem of childhood obesity. Their product, the “Champion’s Chocolate Chip Cookie” is made with healthy omega fatty acid-boosting ingredients and meant to be an alternative to popular snack choices. They also created an accompanying nutrition program that educates parents about food and makes them more accountable for what they give their children. “First, it is important to recognize that Alabama is ranked No. 2 in the nation in reference to obesity, and Macon County’s population is classified as at least 40 percent obese,” Perry said. “What made my group and I choose childhood obesity were the alarming health risks 17 percent or more obese Alabamian children would face, such as, heart disease, diabetes, and even psychological depression.”

Before the final round of competition, Yunus addressed the participants, judges and members of the university and regional community in the Kellogg Hotel ballroom. He shared his personal account about why he became involved in social business first in Bangladesh, now all over the world. He said the problems he found in his home country are problems that are faced all over the world, including Macon County. He said the business plan competition was a starting point in generating ideas that can serve a higher purpose.

He also said charity, although helpful, is not a final solution to address society’s ills.

“When charity money goes out, it goes out and does a wonderful thing. But, it doesn’t come back,” Yunus said. “We spend more time raising the money than doing the thing. If we use a business model, the whole thing opens up.” 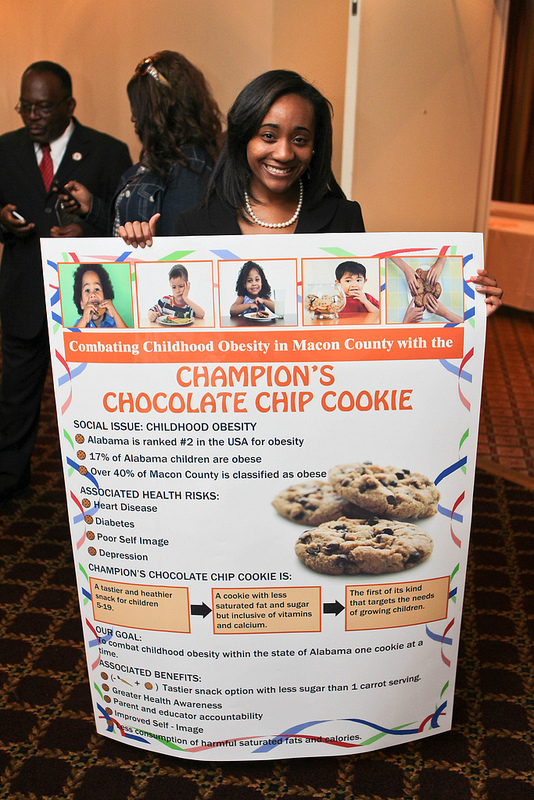 Randi Harrison, a junior elementary education major at Tuskegee University from Spartanburg, S.C., holds up her group's presentation poster for their nutrient-enriched and healthier chocolate chip cookie idea for children that was submitted for the competition (Courtesy of Tuskegee University)

The Tuskegee teams’ presentations addressed several issues such as: childhood obesity, community education centers and farm lending. The competition’s first place winner was one of the university’s teams.  Dalla Alkordi, a graduate student studying agricultural economics, and her adviser, Youssouf Diabate, an assistant professor of agricultural and resources economics, presented a plan to create a local bank that would extend loans to farmers in the Black Belt region.