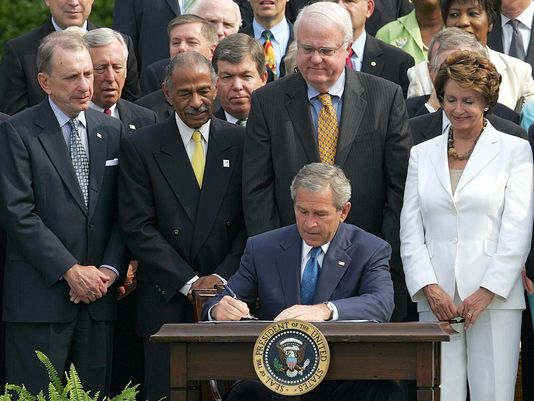 (New York Times) – On July 20, 2006, the United States Senate voted to renew the Voting Rights Act for 25 more years. The vote was unanimous, 98 to 0. That followed an overwhelmingly bipartisan vote in the House of Representatives, which passed it by a vote of 390 to 33. President George Bush signed the renewal with apparent enthusiasm a few days later.

This bipartisan support for the Voting Rights Act — first enacted into law 50 years ago this month by Lyndon B. Johnson — was not unusual; indeed, it was the rule throughout most of the legislation’s history on Capitol Hill. And if you want to understand how dramatically Congress’s partisan landscape has changed in the Obama era, it’s a particularly useful example.

As it happens, two bills introduced in the past two years would restore at least some of the act’s former strength, after the 2013 Supreme Court decision in Shelby v. Holder, which significantly weakened it. And both are languishing, with no significant Republican support and no Republican leader willing to bring them to the floor for a vote. What was, less than a decade ago, an uncontroversial legislative no-brainer is now lost in the crevasse of our partisan divide.

The newly inhospitable climate the Voting Rights Act faces on Capitol Hill is largely the result of the 50-year effort to weaken the law that I wrote about in the magazine’s Aug. 2 cover story, conducted by a small group of ideologues and activists intent on weakening its strongest provisions. And the change threatens to render President Obama’s recent calls for the “restoration” of the act — which he reiterated in a letter to the magazine today — moot for as long as Congress maintains its current partisan makeup.