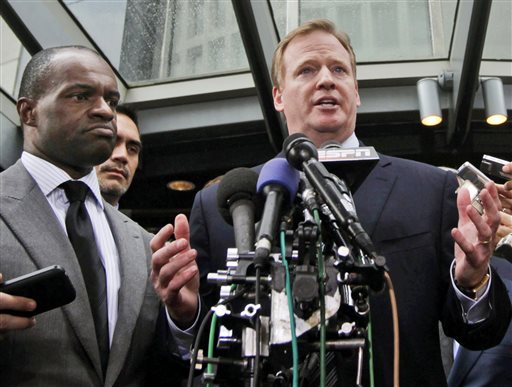 In this Aug. 28, 2014, file photo, Denver Broncos wide receiver Wes Welker (83) watches the action from the sideline in the second half of a NFL preseason football game against the Dallas Cowboys in Arlington, Texas. (AP Photo/LM Otero, File)

NEW YORK (AP) — The NFL finally will have HGH testing, perhaps as early as the end of this month.

And of more immediate impact — this weekend — the new performance-enhancing drug policy the league and players’ union agreed to Wednesday will allow the Broncos’ Wes Welker and two other suspended players to return to the field.

Welker, Dallas Cowboys defensive back Orlando Scandrick and St. Louis Rams wide receiver Stedman Bailey had been suspended for four games. All can return Sunday under the new rules in which players who test positive for banned stimulants in the offseason will no longer be suspended. Instead, they will be referred to the substance abuse program.

Players who test positive for banned stimulants during the season will continue to get four-game suspensions.

“I said it was flawed and we got it fixed,” said Welker, who tested positive for amphetamines in the offseason. “I think you know that just kind of goes to show it was flawed and it’s fixed now and we can move on from it.”

The league and union are also nearing an agreement on changes to the substance abuse policy. That could reduce Cleveland Browns receiver Josh Gordon’s season-long ban.

Testing for HGH was agreed upon in 2011 when a new collective bargaining agreement ended the lockout of the players. But the players had balked at the science in the testing and the appeals process for positive tests. Under the new deal, appeals of positive tests in the PED program will be heard by third-party arbitrators jointly selected and paid for by the NFL and union. Appeals will be processed more expeditiously under altered procedures.

The new rules also change the length of suspensions. Previously, all first-time violations of the performance-enhancing drug policy resulted in at least a four-game suspension.

Now, use of a diuretic or masking agent will result in a two-game suspension. The punishment for steroids, in-season use of stimulants, HGH or other banned substances is four games. Evidence of an attempt to manipulate a test is a six-game suspension.

A second violation will result in a 10-game ban, up from a minimum of eight games. A third violation is at least a two-year suspension. Before, the ban was at least a year.

Rams coach Jeff Fisher said he will use Bailey on special teams and probably as a wideout.

“It feels extremely good to be back here,” Bailey said. “The first two weeks it was a dreadful feeling for me and I’m just happy it’s all over now.”

Reps. Darrell E. Issa and Elijah E. Cummings, the chairman and ranking member of the House Committee on Oversight and Government Reform, chipped in with their approval of the HGH testing:

“This new HGH policy sends a clear message to NFL players, as well as student-athletes at the collegiate, high school, and youth levels, that HGH and other performance-enhancing drugs are highly dangerous and will not be tolerated in athletic competition,” they said in a statement.

FSU Benches Winston for 1st Half of Clemson Game

A Look at Key Developments in NFL Controversies