FSU Benches Winston for 1st Half of Clemson Game
Advertisement 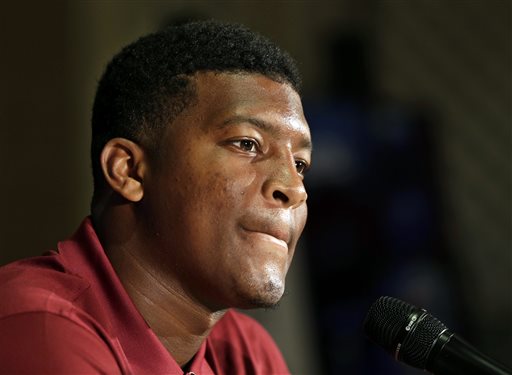 TALLAHASSEE, Fla. (AP) — Jameis Winston will be a spectator in the first half of Florida State’s showdown against Clemson Saturday after making “offensive and vulgar” comments about women — the latest embarrassment in a growing list of poor decisions off the field.

Florida State interim President Dr. Garnett S. Stokes and athletic director Stan Wilcox announced in a joint statement Wednesday that the quarterback also will undergo internal discipline, but did not provide details of the punishment.

Several students tweeted Winston stood on campus Tuesday and shouted a lascivious comment about female anatomy that may have derived from an internet meme.

The 20-year-old Winston addressed his inappropriate comments before Wednesday’s practice at his weekly press conference, saying: “I have to tone it down.”

The Heisman Trophy winner has made similar comments after previous incidents and Florida State seems to be growing less tolerant of his discretions.

While playing for the Florida State baseball team, he was suspended for three games and completed 20 hours of community service after acknowledging he stole $32 worth of crab legs from a local grocery store in April. Before the football season, he said he had matured, learned what it takes to be a leader and understood that he needed to be more careful in his personal life.

The school president and AD admonished him Wednesday for doing just the opposite.

“As the university’s most visible ambassadors, student-athletes at Florida State are expected to uphold at all times high standards of integrity and behavior that reflect well upon themselves, their families, coaches, teammates, the Department of Athletics and Florida State University,” their joint statement said. “Student-athletes are expected to act in a way that reflects dignity and respect for others.”

The university is currently under investigation by the Department of Education for the way it handles reports of sexual assault, including a case involving Winston. The investigation was prompted by a complaint from a FSU student who says Winston assaulted her in 2012.

A lawyer for the woman says the university is currently conducting its own investigation of that incident.

Winston has had other run-ins with police since enrolling at the university.

Police questioned Winston and other FSU players in November 2012 after 13 windows were broken at an apartment complex near Doak Campbell Stadium after an apparent BB gun battle. That same month, Winston and teammate Chris Casher were held at gunpoint by campus police for hunting squirrels. The two told police they were shooting squirrels with a pellet gun along a bike trail. Police were also called after a Burger King employee called to complain that Winston was stealing soda.

Winston was not arrested in any of those three incidents.

On Wednesday, the Heisman Trophy winner gave a statement in which apologized for the lewd comments.

“It’s not something we want or we’re indicative of and it’s not a good decision,” Fisher said. “It was something that has to be addressed.

“You can’t make certain statements that are derogatory or inflammatory in any way toward any person, race, gender,” said Fisher, whose top-ranked Seminoles host No. 22 Clemson on Saturday in an Atlantic Coast Conference showdown. “The statements in which you make are always going to be made more public than statements that other individuals make,” the coach said. “And that’s just the nature of the business of who you are and what you are. That’s the situation it is and you have to understand that.”

Winston’s continued questionable behavior could not only affect his future NFL draft stock, but possibly his status as a student.

He could be removed from school pending the outcome of the investigation into whether he violated the school’s code of conduct policy stemming from the sexual assault accusation. Winston has repeatedly indicated there was a strong chance he could return for another year of college football, but this latest incident could change that.

Saturday’s showdown between the top-ranked Seminoles and No. 22 Clemson is a rematch of a game that really put Winston in the national spotlight. Florida State rolled over the Tigers 51-14 en route to a national championship. Winston threw for 444 yards, three touchdowns and ran for another score.