A Look at Key Developments in NFL Controversies
Advertisement 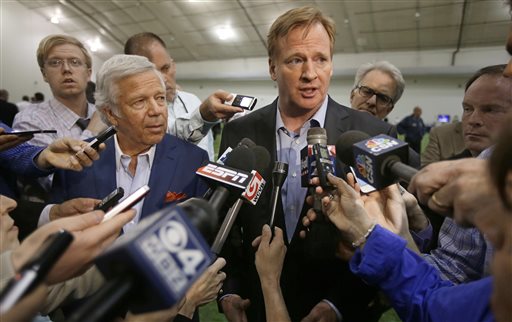 In this Thursday, May 29, 2014, file photo, NFL Commissioner Roger Goodell, right, addresses members of the media in Foxborough, Mass. The NFL is under pressure from sponsors, fans and lawmakers for its handling of domestic violence allegations against several players. At issue is whether the league is acting swiftly enough to investigate or discipline players. (AP Photo/Stephan Savoia, File)

NEW YORK (AP) — The NFL is under pressure from sponsors, fans and lawmakers for its handling of domestic violence allegations against several players. At issue is whether the league is acting swiftly enough to investigate or discipline players.

Here is a look at key developments Wednesday:

VIKINGS: WE MADE A MISTAKE

The Minnesota Vikings reversed course and indefinitely benched star running back Adrian Peterson, claiming they “made a mistake” in reinstating him as he faced a child abuse charge in Texas for spanking his son with a tree branch. In an interview with the Houston Chronicle, Peterson’s mother said the player was “trying hard to be a good parent” and that she had used her hand, branches and belts to discipline Peterson and his siblings. “When you whip those you love, it’s not about abuse, but love,” Bonita Jackson said.

Arizona running back Jonathan Dwyer was arrested on aggravated assault charges in connection with two altercations at his home in late July involving a 27-year-old woman and an 18-month-old child. One of the counts was “aggravated assault causing a fracture.” The Cardinals said they became aware of the situation Wednesday and are cooperating with the investigation. Dwyer has been deactivated from all team activities.

The Carolina Panthers removed Greg Hardy from the team’s active roster until his domestic violence case is resolved. Hardy was convicted July 15 of assault on a female and communicating threats after the victim claimed the 6-foot-4, 275-pound player threw her in the bathtub and onto a sofa covered with guns before threatening to kill her. Hardy is appealing. “We have attempted to be thoughtful about this, but there is no rule book for this,” Carolina general manager Dave Gettleman said.

Nike suspended its sponsorship deal with Peterson. In a statement, the company said that it “in no way condones child abuse or domestic violence of any kind and has shared our concerns with the NFL.”

The father of a woman who once dated Bears receiver Brandon Marshall recounted abuse allegations from 2008 in a news conference, and claimed he wrote the NFL about his daughter’s case but never got a response. Marshall served a one-game suspension in the case. Attorney Gloria Allred, who called the news conference, said she is asking the league to come up with a better investigation procedure.

House Minority Leader Nancy Pelosi says the NFL’s investigation into the Ray Rice case is appropriate — for now. But the California Democrat didn’t rule out that Congress may reconsider the NFL’s anti-trust exemption, which allows teams to negotiate radio and television broadcast rights together. The NFL players’ union appealed Rice’s indefinite suspension Tuesday night, saying that he shouldn’t be punished twice for punching his fiancee in a casino elevator. Rice was originally handed a two-game suspension in July under the NFL’s personal conduct policy after he was charged with assault for the Feb. 15 attack.