N.C.A.A. May Let Top Conferences Play by Own Rules
Advertisement 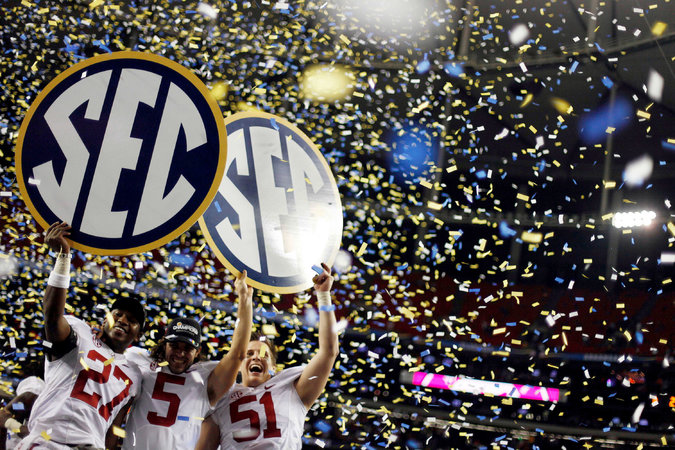 Alabama, with a top football team, is in the Southeastern Conference, which would gain more autonomy. (David Goldman/AP)

(New York Times) – The universities with the country’s most prominent athletics programs are expected to gain preliminary approval Thursday to break away from some of the strictures of the N.C.A.A., a significant change that would give them more freedom to govern themselves and could allow athletes to share in the wealth of college sports.

Under the proposal, the N.C.A.A. would clear the way for sports powerhouses like Alabama and Ohio State to pay their athletes a few thousand dollars more than what the current scholarship rules allow, loosen restrictions against agents and advisers, and revamp recruiting rules to ease contact with top prospects.

The so-called Big 5 conferences, with their glittering facilities and huge stadiums, have long existed in their own tier on the college sports landscape. But the vote Thursday would make their first-class status official, granting them greater autonomy from the N.C.A.A. rules that are currently applied evenly across 32 conferences and nearly 350 institutions in the N.C.A.A.’s top division.

The new rules would further widen the gulf between the 65 universities in the wealthiest conferences — the Southeastern Conference, the Atlantic Coast Conference, the Pac-12, the Big Ten and the Big 12 — and other universities across the country that have less money for their sports programs and would still be governed by N.C.A.A. rules.