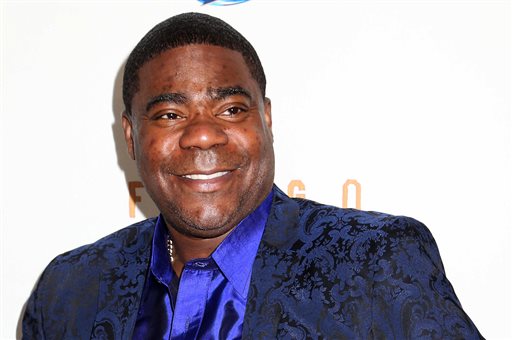 In this April 9, 2014 file photo, actor Tracy Morgan attends the FX Networks Upfront premiere screening of “Fargo” at the SVA Theater in New York. Wal-Mart says actor-comedian Morgan and other people in a vehicle struck from behind by a company truck on a New Jersey highway in June weren’t wearing seatbelts. Wal-Mart’s filing was made Monday, Sept. 29, 2014, in federal court in response to a lawsuit Morgan filed in July. (Photo by Greg Allen/Invision/AP)

NEWARK, N.J. (AP) — Tracy Morgan said Tuesday that he “can’t believe” Wal-Mart’s assertion that he and others were partly to blame for their injuries in the highway crash on the New Jersey Turnpike that killed one of his friends.

In a statement released by Morgan’s publicist, the actor-comedian said, “I can’t believe Walmart is blaming me for an accident that they caused. My friends and I were doing nothing wrong.”

The former “Saturday Night Live” and “30 Rock” star was returning from a performance in Delaware in June when a Wal-Mart truck slammed into the back of a limo van he and others were riding in. James McNair was killed and several others were injured.

Morgan suffered leg and rib injuries and spent about a month in rehab in New Jersey.

“I’m fighting hard every day to get back,” Morgan also said in the statement and thanked his fans “for sticking with him during this difficult time.”

Morgan sued over the crash, and Wal-Mart said in a court filing Monday that Morgan and his traveling companions caused their injuries “in whole or in part” because they weren’t wearing seatbelts.

Brooke Buchanan, a spokeswoman for Wal-Mart Stores Inc., based in Bentonville, Arkansas, issued a statement Tuesday saying the company filed the response as legally required “that included facts and defenses that may impact the case moving forward.”

Buchanan said the company has encouraged discussion toward a settlement and added: “Our thoughts continue to go out to the families and friends of everyone involved.”

The truck driver, Kevin Roper, of Jonesboro, Georgia, pleaded not guilty to death by auto and assault by auto charges in a New Jersey court. A criminal complaint also accuses him of not sleeping for more than 24 hours before the crash, a violation of New Jersey law.

A report by federal transportation safety investigators said Roper was driving 65 mph in the minute before he slammed into the van. The speed limit on that stretch of the turnpike is 55 mph and was lowered to 45 mph that night because of construction.