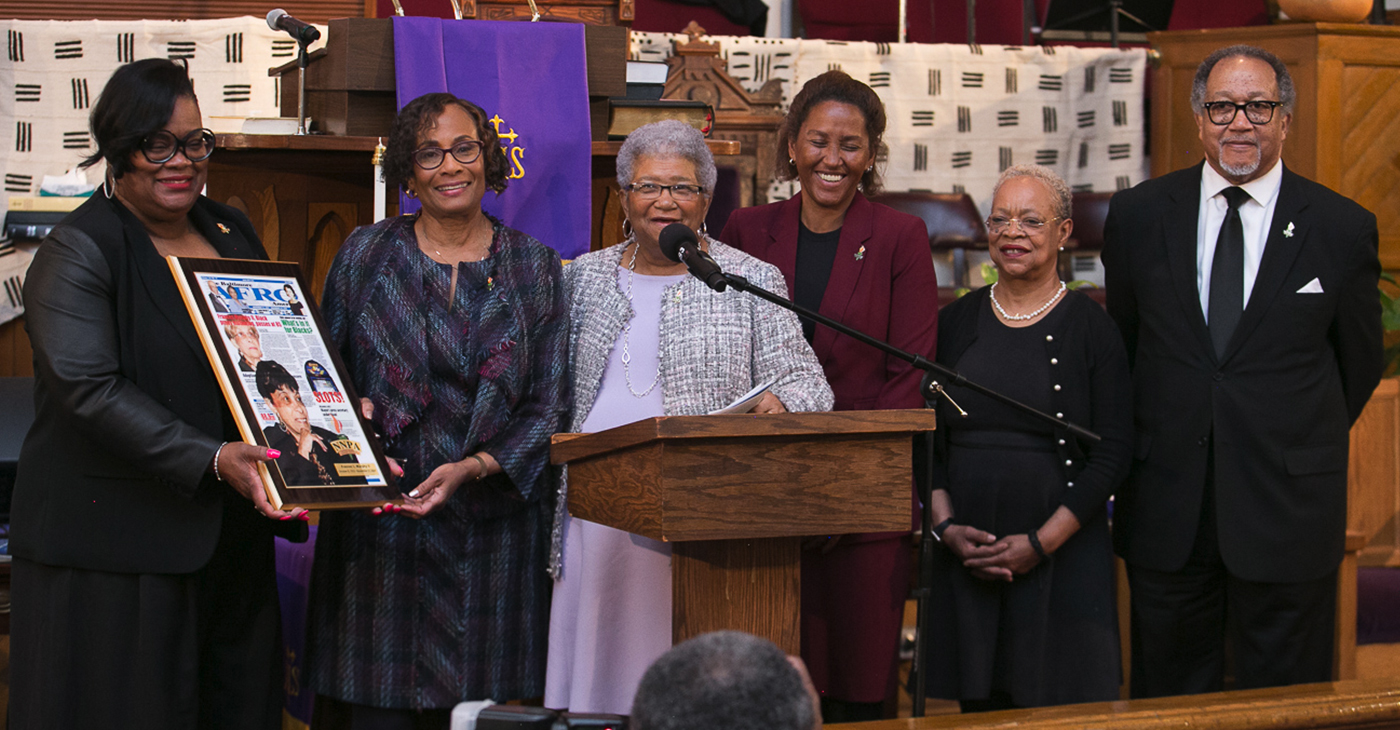 Garvey was also a noted figure in the publishing world where for five-cents, readers of his newspaper received a front-page editorial written by him along with poetry and articles of international interest to people of African ancestry.

Murphy, a graduate of Frederick Douglass High School in Baltimore, who received her bachelor’s in journalism from the University of Wisconsin and degrees from Coppin State College and Johns Hopkins University, believed the AFRO belonged to the community. As its publisher, every year she would invite readers to write their family histories and send them in along with historical pictures.

“My mother wrote a column called ‘If you asked me,’ so I believe if my mother was here today she would say, ‘if you asked me, it’s certainly a privilege to be honored by the National Newspaper Publishers Association,’” said the Rev. Dr. Toni Draper, Murphy’s daughter, who accepted the enshrinement on her late mother’s behalf.

“My dad developed his oratorical skills in large part through his work in newspapers, other publications and speeches,” Garvey said. “He used the dictionary and would read through it learning new words every day and, at one point, his words reached between 6 and 11 million people around the world,” he said.

The Black Press Archives was founded in 1973, as a joint project of Howard University and the NNPA, and established at the University’s Moorland-Spingarn Research Center.

According to the Houston Forward Times, the idea of establishing a Black Press Archives and Gallery of Distinguished Newspaper Publishers was that of William O. Walker, editor-publisher of the Cleveland Call and Post, who first articulated the need for an academic institution that would provide a setting in which historical records related to the Black Press, as well as the newspapers themselves, could be collected, preserved and made available to scholars, students and the public.

Walker also envisioned a gallery in which the photographs and accomplishments of Black Press notables would be on permanent display.

The idea was developed by the NNPA under the direction of Carlton B. Goodlett, NNPA president and editor-publisher of the San Francisco Sun-Reporter, and welcomed by James E. Cheek, then president of Howard University.

In March 1977, during the sesquicentennial celebration of the founding of Freedom’s Journal, the first African American newspaper, the Black Press Archives and Gallery of Distinguished Newspaper Publishers were dedicated in ceremonies at Howard University.

Garvey and Murphy join dozens of others to receive enshrinement.

Born in 1887 in St. Ann’s Bay, Jamaica, Garvey counted as one of 11 children – only Marcus and one of his siblings survived into adulthood.

Garvey received an education in London that would likely have not been available to him in the Americas because of the color of his skin.

He later returned to Jamaica and started the United Negro Improvement Association and he went on to create thousands of jobs for Black people in America and abroad through his many enterprises under the umbrella of the Negro Factories Corporation.

At the ceremony held inside DC’s historical Metropolitan AME Church, a contingent of Garvey family and friends included the chief of the mission of the Embassy of the Republic of Sierra Leone, Ambassador Sidique Abou-Bakarr Wai.

Family and friends and AFRO employees were on hand to witness Murphy’s enshrinement.

Born in 1922, Murphy enjoyed two professions for most of her life – working at the AFRO, which was founded by her grandfather, John H. Murphy Sr., in 1892 and teaching.

From 1958 to 1964, she taught third grade in the Baltimore City Public Schools and also taught at Morgan State College where she headed the news bureau from 1964 to 1971.

She also taught at the University of Maryland Baltimore County and at the State University College at Baltimore, where Murphy headed the journalism sequence from 1975 to 1985.

“If my mom were here today, I think she’d say, ‘if you ask me, I could have told you years ago that the Black Press would still be alive and well,” Draper said.

For a complete list of all of the NNPA publishers enshrined and a special edition on the 192 years of the Black Press, click here.