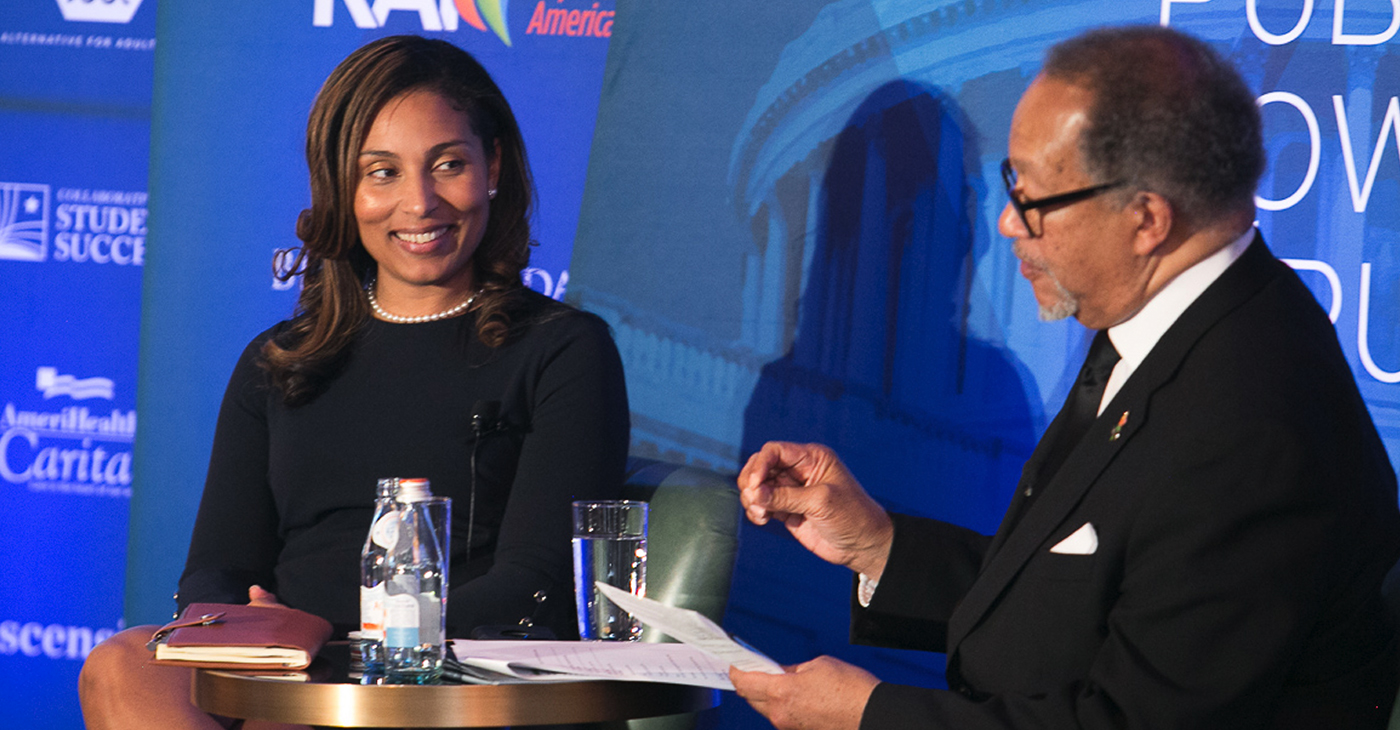 General Motors continued to show its commitment to diversity and inclusion and a dedication to the partnership it has developed with the National Newspaper Publishers Association (NNPA) as representatives attended Black Press Week and sat for a fireside chat with NNPA President and CEO Dr. Benjamin F. Chavis, Jr.

Chavis relayed questions from a live audience – including a group of students from the Duke Ellington School of the Arts – at a fellowship luncheon held inside the Dupont Circle Hotel in Washington as he chatted with Cherie Wilson, the director of Federal Affairs for General Motors.

The chat was also was live-streamed to viewers across the Black Press of America’s social media platforms, including Facebook.

Wilson said she learned from her colleague, Lester Booker, Jr., about the popular Discover the Unexpected (DTU) program where Chevrolet and NNPA teamed up for a journalism fellowship program that provides students attending Historically Black Colleges and Universities the opportunity for an eight-week, immersive training experience with the Black Press.

It’s just one of many programs that shows GM’s commitment to diversity and inclusion, particularly within the African American community, Wilson said.

“It’s really a phenomenal opportunity for young individuals interested in journalism to be exposed to the Black Press in particular and to also have a connection with Chevrolet where we’ve provided students with a $10,000 scholarship and a $5,000 stipend and access to a specific Chevy-branded vehicle to take a road trip and engage with community stakeholders and key leaders to learn about what’s happening in the African American community,” said Wilson. “And, to develop a narrative around that and share it,” she said.

Among Wilson’s responsibilities at GM is developing and executing legislative and political engagement in vehicle finance, corporate sustainability and diversity.

She spearheaded GM’s first cross-functional Diversity and Inclusion Report and established sustainability as part of the Federal issue portfolio to better align messaging and policy development.

“Given our commitment to the NNPA and ensuring that our stories are getting out to communities of color, people who look like us know what we’re doing,” Wilson said.

The goal to navigate an urban driving course in an automated driving mode.

“We’ve also engaged with Howard University with AMIE, so it really does provide us with the opportunity to tap into diverse talent and to create a pipeline, because if we don’t engage with a diverse community of color, we will have the same problem of how do we engage in diversity,” Wilson said.

AMIE is an acronym for Advancing Minorities’ Interest in Engineering, which counts as a coalition of corporations, government agencies and the Engineering Schools at the ABET accredited HBCUs.

The primary purpose is to facilitate partnerships between corporations and/or government agencies and one or more of the HBCU engineering programs.

Wilson said General Motors remains committed in getting its message out through advertising in the Black Press, stating, “I think this is an example of one way we hope to engage in this particular audience. “You [The Black Press] have an important role of informing people of color and ensuring that the important narrative is told.

“I think we have been able to really engage and partner with NNPA and the Black Press in general because it’s very important that the communities in which we live and work are very representative of those we engage so we will continue to have robust conversations with the Black Press to make sure that we get out the message.”

Amid adversity, Doris Hill says, ‘act like we want to live’