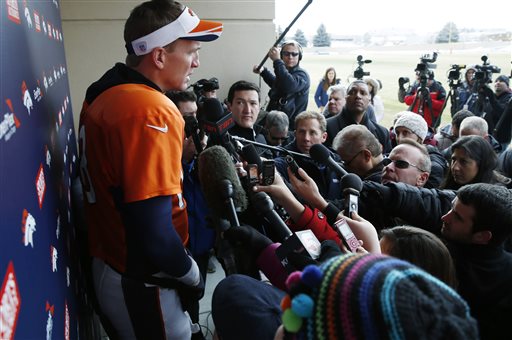 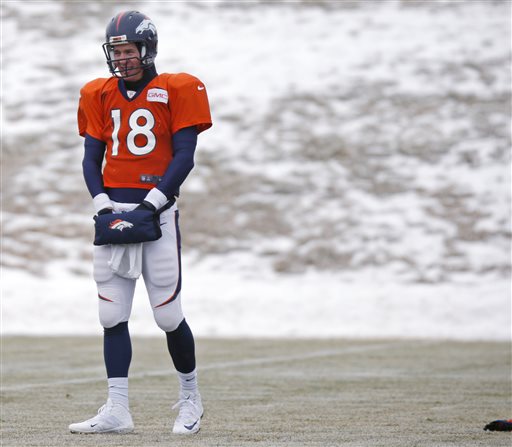 Denver Broncos quarterback Peyton Manning keeps his hands warm in a pouch while waiting to throw the football during practice for the team’s NFL divisional playoff game against the Indianapolis Colts Wednesday, Jan. 7, 2015, in Englewood, Colo. (AP Photo/David Zalubowski)

ENGLEWOOD, Colo. (AP) — The longer Peyton Manning talked about his former team, the hotter he became.

The Denver Broncos quarterback rarely took his reddened hands out of the pouch around his waist Wednesday following a two-hour practice in 16-degree, windy weather.

After nine minutes of chatting about a showdown with Indianapolis in an AFC divisional playoff game Sunday, he went inside to get warm, softly muttering, “It’s cold out here, huh?”

Manning’s numbers tend to dip when the thermometer does. He’s 12-13 in his career when the temperature is 40 degrees or below, according to STATS.

This should warm up Manning and Broncos fans, however: Forecasters are calling for a warm-up this week and balmy conditions are expected on game day, with the high in the 40s, maybe a cool breeze and no precipitation.

“Peyton is going to go out there and play well,” declared running back C.J. Anderson. “But it takes a team and we have to help him.”

Even if a cold front were to suddenly descend upon the city — this is Denver, after all — the Broncos are built for harsher conditions these days. They no longer rely so heavily on Manning’s right arm but on a revamped running game and a dominant defense that features five Pro Bowlers and a couple of notable snubs.

“We’ve played in about every scenario that I can think of in my three years here,” tight end Jacob Tamme said. “We’ve had the unbelievably cold and the absolutely beautiful. We have a team built that can win in any conditions. And that’s what you need right now.”

Although Manning’s record is sub-.500 in chilly conditions, his overall numbers really aren’t that ghastly. He’s thrown 43 touchdown passes and 27 interceptions while completing 62.6 percent of his passes, according to STATS. His completion percentage since joining the Broncos in 2012 is 67.7.

When the wind picks up, though, Manning’s numbers don’t exactly soar. He’s 3-6 with gusts of 20 mph or more and has thrown 11 interceptions and just seven TD passes. His completion percentage is 58.5 percent.

But it’s not supposed to be that windy Sunday against the Colts. Kyle Fredin, a meteorologist with the National Weather Service, said the latest forecast models have the wind blowing in the 10-to-15 mph range.

“I think we can win this year in any conditions,” Tamme said.

Since a Nov. 16 loss in St. Louis when Manning threw the ball 54 times, the Broncos have worked on being more balanced. They’ve run the ball 186 times over the last six games and attempted 194 passes.

“I feel pretty good physically,” Manning reiterated Wednesday. “Like all players, I’ve battled through some injuries. I think the bye week came at a good time for us to give some guys a chance to get healthy. We’ve tried to find different ways to win football games and hopefully that prepares us well when you get into these playoff games and anything can go on. Different games take on different identities.

“You never know what it’s going to be but I think we’ve proven we can win games differently and hopefully that serves us well potentially on Sunday.”

“The Colts are a big-time team, too, and it’s always hard to beat a team twice,” said Miller, whose squad knocked off the Colts 31-24 at home in the opening game of the season. “We’ve got to take advantage of the opportunity now, and that’s where everybody’s mindset is at.”

After all, at 38, Manning is trying to supplant his boss, John Elway, as the oldest QB to win a Super Bowl.

“I think our team has played with a sense of urgency all season, to tell you the truth,” Manning said. “That is what we’re going to have on Sunday because it’s helped us win a lot of games this year.”

Investigator: NFL Should Have Sought More Info in Rice Case