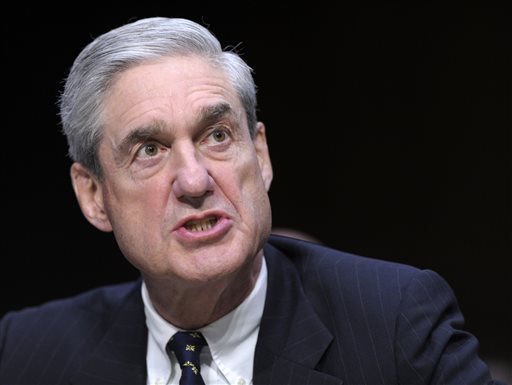 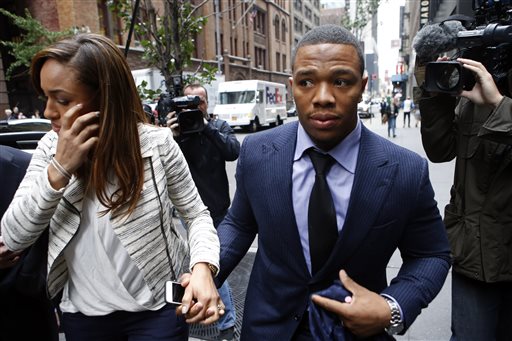 In this Nov. 5, 2014, file photo, Ray Rice arrives with his wife Janay Palmer for an appeal hearing of his indefinite suspension from the NFL in New York. (AP Photo/Jason DeCrow, File)

NEW YORK (AP) — Commissioner Roger Goodell got a strong vote of confidence from team owners on a day a league-hired investigator determined the NFL botched the Ray Rice case, but found no evidence of a cover-up.

The long-awaited Mueller report was released Thursday with no unexpected findings: the league mishandled its investigation on Rice and had a weak domestic abuse policy, but investigators didn’t confirm that league officials saw tape of Rice hitting his fiancee before it was released.

Owners and executives were quick to say the league had learned from its mistakes and is solidly behind Goodell and changes he has made.

“There was resounding support for Roger,” Steelers President Art Rooney said. “There’s a very strong confidence in Roger going forward in terms of him being the commissioner of the league.”

The report from former FBI director Robert S. Mueller III said the league’s investigative system relied too much on information from law enforcement after the Ravens running back knocked out his fiancee in an elevator at the Revel Casino in Atlantic City.

The 96-page report said Goodell and his investigators might have seen the video of Rice hitting Janay Palmer before handing down the suspension had they tried harder.

“The NFL should have done more with the information it had and should have taken additional steps to obtain all available information about the Feb. 15 incident,” Mueller said in a statement after releasing his report.

The report said a review of phone records and emails of NFL employees showed no evidence that anyone in the league had seen the graphic video before it hit the Internet in September. A law enforcement official showed The Associated Press videos of the incident and said he mailed a DVD to NFL headquarters in April.

The private investigation, without subpoena power, didn’t include any contact with the law enforcement official who showed the AP the videos. The officer played the AP a 12-second voicemail from an NFL office number dated April 9, in which a woman verifies receipt of the DVD and says: “You’re right, it’s terrible.”

The official, who insisted on anonymity because he wasn’t authorized to share the evidence, told the AP on Thursday he didn’t speak with investigators.

“I took steps to ensure a call from any person at the NFL wouldn’t be traced back to me and I was never contacted by the team of investigators hired by the NFL to investigate the NFL,” he said. “I still don’t know who confirmed receiving the video and I don’t know what that person did with it.”

“We have reviewed the report and stand by our original reporting,” said Kathleen Carroll, the AP’s executive editor.

“The Mueller team did ask us for source material and other newsgathering information, but we declined. Everything that we report and confirm goes into our stories. We do not offer up reporters’ notes and sources.”

Rooney and Giants owner John Mara, the men appointed by Goodell as liaisons to the investigation, said the 32 team owners were briefed in a conference call Thursday morning. They all expressed their belief Goodell told the truth throughout the investigation.

They reiterated their backing of Goodell, whose job never appeared in jeopardy despite the missteps by the league in the Rice case and calls for scrutiny of him from outside groups.

Still, Mueller found the NFL’s deference to the law enforcement process involving Rice “led to deficiencies in the league’s collection and analysis of information during its investigation.” He added such an approach “can foster an environment in which it is less important to understand precisely what a player did than to understand how and when the criminal justice system addresses the event.”

Mueller’s report details some of the efforts the NFL made in obtaining the video, but said the league should have taken additional steps.

“League investigators did not contact any of the police officers who investigated the incident, the Atlantic County Prosecutor’s Office, or the Revel to attempt to obtain or view the in-elevator video or to obtain other information,” the report said. “No one from the league asked Rice or his lawyer whether they would make available for viewing the in-elevator video they received as part of criminal discovery in early April.”

The report also said the league didn’t follow up on initial conversations with the Ravens to determine whether the team had more information.

The official showed the AP multiple videos from the casino the night Rice was arrested. Those videos included security cameras from inside and outside the elevator and two cellphone videos that included some audio.

The league said it considered the video published by TMZ in September to be new evidence meriting an indefinite suspension. Its emergence drew renewed backlash to the league from women’s organizations, members of Congress and players — all calling for more detail on how the NFL handled the case.

Mara and Rooney said Mueller made six recommendations that the owners will review. They agreed that the league’s policy on domestic violence was insufficient.

“We were slow to react, and in the case of Ray Rice, the original punishment was insufficient,” their statement said. “In addition, the steps taken by the NFL to investigate this matter were inadequate. Since then, a new policy concerning domestic violence and other rules for conduct violations have been put into place.”