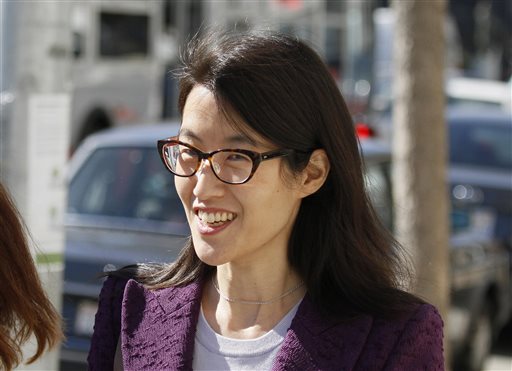 Lawyer Lynne Hermle made the claim in a packed courtroom during her closing argument in the lawsuit filed by Ellen Pao against Kleiner Perkins Caufield & Byers.

Pao made the complaint because she realized she wasn’t succeeding at the company, Hermle said.

“The complaints of Ellen Pao were made for only one purpose — a huge payout for team Ellen,” the lawyer said.

The suit has shined a light on gender imbalance in the technology and venture capital sectors and led some companies to re-examine their cultures and practices — even before the jury reaches a verdict.

Pao’s lawyer made his closing argument earlier, telling jurors the company had different standards for men and women that led to the denial of a promotion to Pao despite her accomplishments.

“The evidence in this case compels the conclusion that men were judged by one standard and women by another,” lawyer Alan Exelrod said. “The leaders of Kleiner Perkins are the ones responsible for this double standard.”

The lawsuit claims Pao was fired in 2012 after complaining about gender discrimination.

Exelrod called the firm a “boys club” and referenced trial testimony and emails from prominent venture capitalist John Doerr, a partner at Kleiner Perkins, to show that Pao had been successful at the company.

“This case should be about what Ms. Pao did for Kleiner Perkins,” Exelrod said.

Among the accomplishments was convincing the firm to invest in a company that later enjoyed great success and helping two companies merge, Exelrod said.

Exelrod said two male colleagues of Pao had been promoted, even though one was called confrontational and another was accused of having “sharp elbows,” an apparent reference to his treatment of other workers.

Exelrod mentioned the affair, discussion about pornography on the plane, and the book of poetry in his closing argument. He accused Kleiner Perkins of trying to smear Pao as a woman who had a sexual relationship at work by characterizing her relationship with the male colleague as a consensual affair gone wrong.

Pao has said the colleague hounded her into the relationship and lied about his wife having left him.

Kleiner Perkins has said Pao was a chronic complainer who twisted facts and circumstances in her lawsuit and had a history of conflicts with colleagues that contributed to the decision to let her go.

Hermle showed jurors a slide with comments from Pao’s work reviews that called her “territorial,” and “not a good teammate.”

The lawyer said the men promoted over Pao had prior venture capital experience and had founded companies, unlike Pao.

A judge ruled over the weekend that Pao can seek punitive damages that could add millions of dollars to a possible verdict in her favor. She is seeking $16 million in lost wages and bonuses.

Experts say Pao’s case has increased awareness about seemingly small indignities faced by women in the technology and venture capital sectors. Consultant Freada Kapor Klein said she has recently been contacted by more than a dozen venture capital and technology companies asking her how they can improve the environment for women.

Klein, whose firm specializes in addressing bias in the workplace, declined to name the firms but said they approached her as a result of the Pao case.

During her testimony, Pao told jurors that her lawsuit was intended in part to create equal opportunities for women in the venture capital sector.

A study released last year by Babson College in Massachusetts found that women filled just 6 percent of partner-level positions at 139 venture capital firms in 2013, down from 10 percent in 1999.

Test Trial to Use Computer Servers to Heat Homes

Are You Willing to Pay to Watch Video Clips Online?