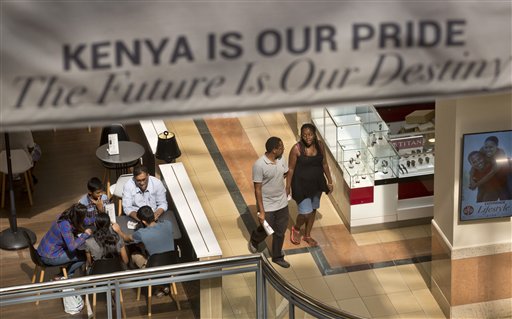 NAIROBI, Kenya (The L.A. Times) — It was the bad example, the embarrassment, the painful memory. But when Westgate shopping mall reopened in the Kenyan capital of Nairobi on Saturday morning, shoppers and politicians poured through the security scanner into the glittering light-filled interior, in a rare moment of hope and closure.

Ben Mulwa, 34, a survivor of the attack, was among the first five to escape the mall during the September 2013 attack, after hiding in a flowerbed as the four terrorists walked by him into the mall. Their calm, expressionless faces haunt him to this day.

He was one of the first to return Saturday, coming, he said, “to finish that business that brought me to Westgate mall,” a lunch meeting with a friend.

“Today is an inspirational moment for us. Many people didn’t make it, as we did. Today we are excited because we are back on our feet and we can convince the world that terrorism is not bringing us down any time soon,” said Mulwa.

At least 67 people died in the attack, which was carried out by four gunmen from the Somali terror group Al Shabab in a siege that dragged on for days, with initial fears that the gunmen may have been holding dozens hostage. The number of attackers was also feared to be higher than just four gunmen, who freed those who could recite a Muslim profession of faith and shot down others, including children.