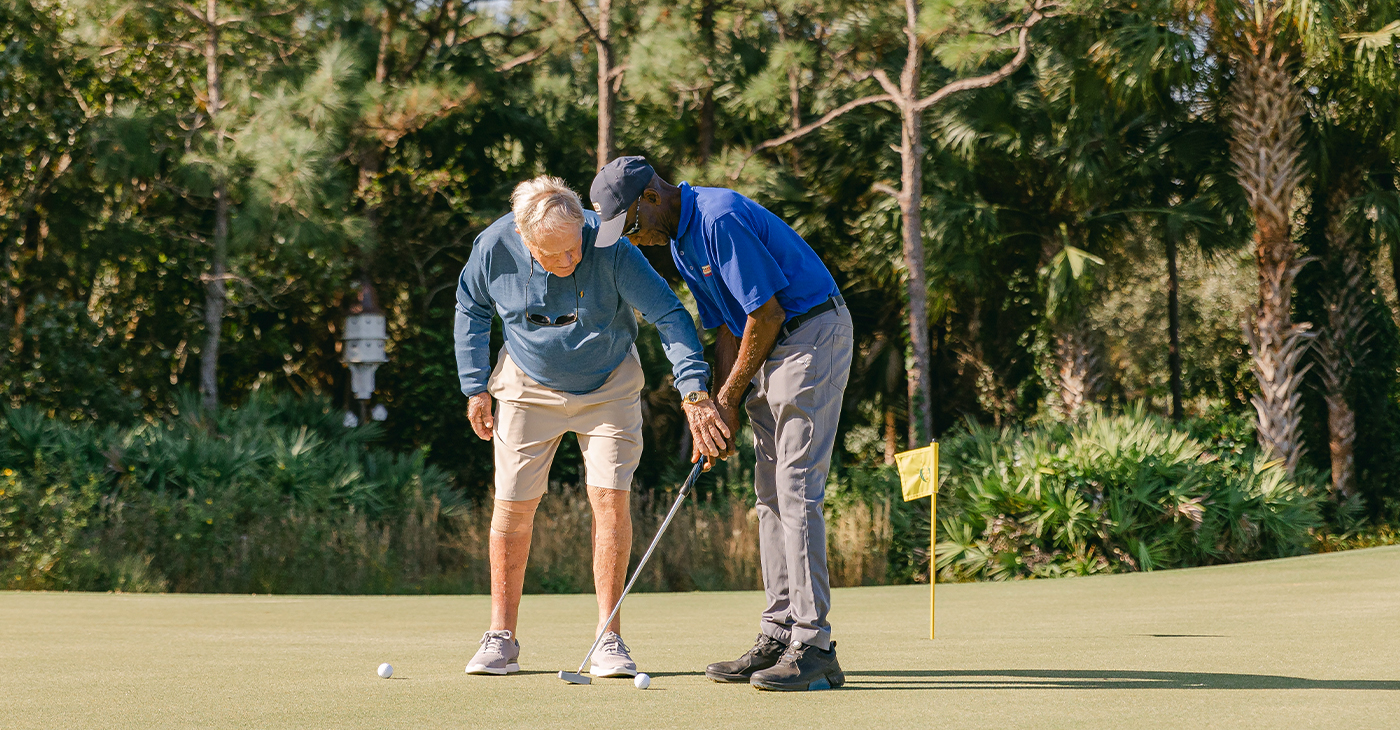 Imagine being invited to play a round of golf at Jack Nicklaus’ Florida home club and getting a surprise lesson from none other than the 18-time major champion himself.

For the third straight year, Nicklaus gave some hometown military heroes who participate in the South Florida PGA Section PGA HOPE (Helping Our Patriots Everywhere) program a memory for a lifetime at The Bear’s Club in Jupiter, Florida.

In celebration of both Veterans Day and the PGA National Day of HOPE, Nicklaus thanked the playing group of Veterans for their service and shared instructional tips, before inviting them out as his guests for a day on the championship golf course that he designed and is played regularly by up to 30 PGA TOUR pros who are members.

As the military pillar of PGA REACH, PGA HOPE is designed to introduce golf to Veterans and Active-Duty Military to enhance their physical, mental, social, and emotional well-being.

PGA REACH and PGA HOPE aspire to create a physically and emotionally healthier Veteran community through a six- to eight-week curriculum led by PGA Professionals trained in adaptive golf and military cultural competency.

Other than hearing from other Veterans from time to time, he said that when he got a call from the Department of Veterans Affairs (VA) inviting him to take part in the PGA HOPE program, it was the first real “welcome home” feeling he ever received for his service.

“The PGA of America reaches out to Veterans, they reach out to all different people,” explained Nicklaus, who is the only sportsman and just the fourth person in history to receive the Presidential Medal of Freedom (2005), the Congressional Gold Medal (2015) and the Lincoln Medal (2018).

“It is a great organization. PGA HOPE is impactful on its own, but they also collaborate with other organizations, such as partnering with Folds of Honor for Patriot Golf Days.

“I have great admiration and respect for the men and women who have served and sacrificed for our country’s freedom, and try to get behind efforts to help our Veterans, as well as their families. For me to do my little part—even to a small group—I am delighted to do so, especially for the PGA HOPE program.”

PGA HOPE has a Memorandum of Understanding (MOU) with the VA, which enables Recreational Therapists to refer Veterans to PGA HOPE as a form of therapy.

Truckenmiller was quite surprised when Nicklaus stepped out on the driving range.

“He’s probably the best golfer ever, and he was most gracious. He helped me with my putting, on lining my ball up, and to stop moving my head. He told me to stare at it when I hit it.

“I lost my wife of 54 years three months ago. This is a remedy for some of the loneliness.”

U.S. Air Force Sgt. (Ret.) Pamela Carter, of Wellington, Florida, lost her brother, Bruce, in the Vietnam War. He received the Congressional Medal of Honor posthumously, and the VA Medical Center in Miami is named after him.

When Nicklaus approached Pamela and gave her a lesson, she quickly reached in her pocket and handed him a challenge coin with her brother’s photo on it.

“I was just shocked he was here,” said Carter. “I stumbled on PGA HOPE and signed up for it. Meeting true war heroes who are now being respected puts a new spin on it. PGA HOPE reaches out and makes us feel welcome.”

“Oh my goodness,” Watts said. “He’s a legend. It was a total shock. I was very surprised. PGA HOPE is such an amazing program. It gets people out of the hospital and into other activities. You meet great instructors who take their time with you. It’s almost like family. Actually, it’s just like family.”

Joining them for instruction and the round of golf was 2022 South Florida PGA Section Patriot Award recipient Jerry Impellittiere, PGA Director of Instruction at Monarch Country Club in Palm City.

He is known as “The Collector,” as he collects donated golf clubs to give to Veterans for them to learn and play the game. Ironically, Impellittiere once played in a grouping with Nicklaus and Dave Stockton at the B.C. Open, two players renowned for their putting.

“I didn’t make the cut, but I led the PGA TOUR in putting stats that year,” said Impellittiere.

Nicklaus has a long-held fondness for the nation’s military and the incredible sacrifices made by service members.

“These people have earned the help of all Americans,” said Nicklaus. “I enjoy doing this. I want to be a part of it, especially if it makes a difference. I am very honored.”

This year, PGA HOPE aims to impact the lives of over 7,500 Veterans through its transformational program led by PGA Professionals, and has set a goal of 36,000 annually by 2026.

In its sixth year, PGA National Day of HOPE is a month-long campaign running through Veterans Day. The campaign celebrates our nation’s heroes who protect our freedom, while raising awareness and support for PGA HOPE.

After Republicans Do Poorly in Midterms, Trump Announces Presidential Run in 2024