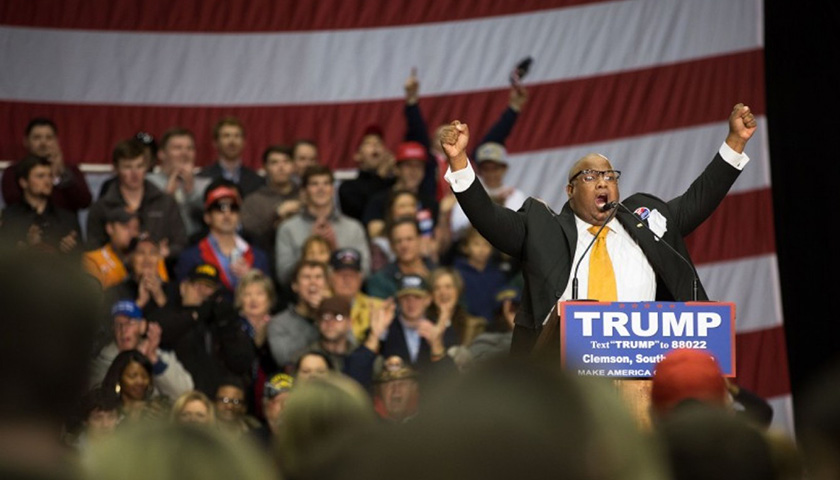 I don’t like name calling and disparaging anyone’s character not, and it’s not because I am a man of God. I say this because it does no good, particularly among Christians, or even as a part political discourse. I also do not support or accept the fact that so many lies are being told and accusations are being flung around about people who are decent, even to “one up” any of them. But I will say this: What “pastor” Mark Burns says and does is so far beyond the pale and over the line, until it’s downright despicable!

What “pastor” Mark Burns tweeted about Secretary (Mrs.) Hillary Clinton was disgusting, uncalled for, and so disrespectful, that if I was Bill Clinton I would probably want to resort to fisticuffs and punch him in the nose. Sorry, there are ways to support “Dump” (sic) that do not have to be as offensive and ugly as the good “reverend” has resorted to but can still protect the integrity of the clergy.

The good “reverend” is completely unhinged. He screams at interviewers with his garbage but as a Pastor one has to wonder what his motivation is in supporting Donald Dump (oops…sic again) or even his (the good “reverend’s”) mental and spiritual state as well, by seeking “filthy lucre.” But the thing that we really need to examine is the fact of how can ANY Christian could even think about being a surrogate (flunky…pawn…puppet…tool), for a man who has stated that he doesn’t apologize and has never had a need to repent of anything. He attacks anyone who does not agree with his twisted views. How can this so-called “reverend” be so closely associated with what we all know is an unbeliever, then being pimped by ‘the devil in a blue suit’ so publicly and shamelessly?

I can’t use the term “politics aside” because it’s apparent that this is business as usual with wolves in sheep’s clothing who prey on others for their own gain. And, he’s not the only handkerchief head preacher and Judas who is cozy with the devil in a blue suit. He is clearly in it for either some type of financial remuneration or what they think is power, albeit worldly, sinister and ghastly repugnant. What he put out was fruit of the poisonous tree that he and his master is peddling among a base that is clamoring for more of the same, along with some spoiled red and rancid meat to further contaminate American society.

These hateful and ignorant people have nothing to offer in terms of policy other than hate, racism, misogyny, xenophobia, fear peddling, and all out lies. Oh, and lest we forget the wall on the southern border that will never happen. The so-called ‘border wall’ that would mean banning of people with different religious views of their own, and deporting 12 million people who already live here, breaking up families and sending them packing. They never talk about they’re real plan to strengthen our infrastructure or make the economy stronger since it has rebounded under President Obama, let alone what they would do to stop the spread of terrorism.

Finish reading this commentary at The Tennessee Tribune.

Why Do Black Businesses Struggle to Grow?