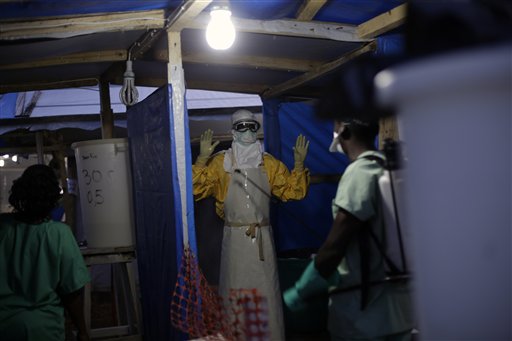 In this Thursday Nov. 20, 2014 file photo, an MSF Ebola heath worker is sprayed as he leaves the contaminated zone at the Ebola treatment centre in Gueckedou, Guinea. Authorities in the country where the Ebola epidemic began are concerned about a new outbreak of cases just as officials hoped the crisis was coming under control. (AP Photo/Jerome Delay, File)

CONAKRY, Guinea (AP) — Relatives of Ebola victims are transporting their bodies on public transportation in Guinea, seating the corpses upright between other passengers to skirt health controls and contributing to the spread of the deadly disease here, authorities said.

The Ebola epidemic began in Guinea and, instead of being snuffed out as officials had hoped, at least 27 new cases have occurred in a week’s time, marking a significant spike.

Bodies of Ebola victims are highly contagious, yet the health recommendations to not touch bodies at funerals go against hundreds of years of tradition here. Family members still want to give their loved ones traditional burials to prepare their souls for the afterlife, and some even try to transport the bodies to their home villages if they died elsewhere.

“It is regrettable that some families with the help of transport providers are dressing up cadavers and seating them upright between other passengers in a taxi as though the person is still living when in fact it’s sometimes the body of someone who has died from Ebola,” said police Capt. Claude Onivogui. “Every day we are finding bodies in these conditions, and that’s what is spreading the contagion.”

The latest Ebola figures from the World Health Organization are the highest in Guinea in more than a month and come just as the country hoped the outbreak was finally coming under control. Neighboring Liberia has been declared Ebola-free and Sierra Leone registered only eight cases during the same time period.

It is against the law to transport bodies of Ebola victims from one community to another. However, Rabiatou Serah, a member of an anti-Ebola committee, said that the relatives who are concealing bodies are managing to get past inspection agents.

Eleven of the 27 new cases were reported in Dubreka, and authorities believe the people who fell sick had come in contact with those who attended the funeral of an Ebola victim in mid-April. Suspicion of outsiders has complicated the efforts of teams trying to investigate.

“Difficulty engaging local communities has made case investigation and contact tracing in the area challenging,” WHO said in its update.

More than 11,000 people have died since the Ebola epidemic first emerged in the forests of southeastern Guinea in December 2013, including more than 2,400 in Guinea.

Liberia, which lost more lives than any other country, has now been declared Ebola-free. Guinea and Sierra Leone are now the only West African countries still reporting new cases.

Several of the new cases were reported along Guinea’s northern border with Guinea-Bissau. Authorities are stepping up surveillance efforts in that area. The prospect of the disease crossing into Guinea-Bissau is alarming because the deeply impoverished country destabilized by decades of coups and military rule has few health care facilities.

The Case for Black Doctors

Researchers Find Interchangeability Between Sleep Disorders and Depression in Men