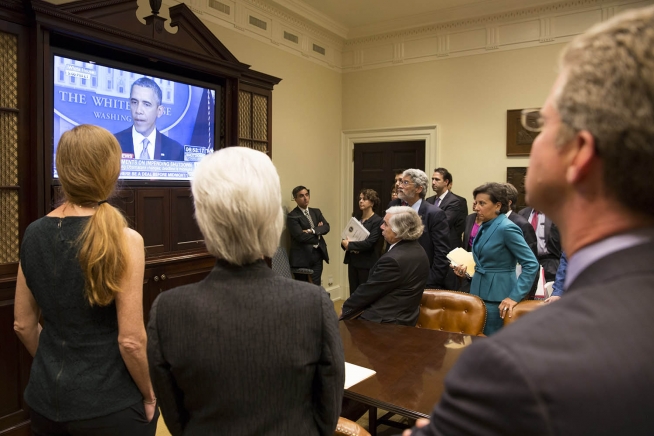 WASHINGTON (NNPA) – Although the shutdown of the federal government that began Tuesday is affecting all Americans, a disproportionate portion of the 800,000 furloughed federal workers are African Americans, according to the U.S. Office of Personnel Management.

Because government jobs have been more available to Blacks than private sector employment over the years, especially under de jure segregation, Blacks, who comprise 13.6 percent of the U.S. population, make up 17.7 percent of the federal workforce.

Overall, people of color represent 34 percent of the federal workforce. Latinos are 8 percent of government workers, Asians are 5.8 percent, Native Americans are 2.1 percent and Native Hawaiian and other Pacific Islanders are .40 percent of federal employees. People of color are 37 percent of the U.S. population, a figure projected to grow to 43.3 percent as soon as 2025 and 57 percent by 2060.

Federal workers considered non-essential to the functioning of government were instructed not to report for work as of Tuesday, the first day of the new fiscal year, because Congress failed to pass a permanent or interim budget in time to prevent a federal shutdown, the first in nearly two decades.

After being criticized by Republicans for “sitting on the sidelines” as the government shutdown moved into its second day, President Obama invited House and Senate leaders to the White House for a late afternoon meeting Wednesday. Top Democratic and Republican leaders in both chambers attended.

Earlier Wednesday, there was no sign of movement on the part of President Obama or House Republicans. Obama has maintained his position that Congress should pass a clean budget bill for fiscal 2014. House Republicans, at the prompting of its ultra conservative Tea Party wing, are seeking a one-year delay in some of the provisions of the Affordable Care Act.

The White House meeting was an attempt to break the stalemate. After the meeting, however, neither side reported any progress.

The impasse came as a result of a Republican-controlled House determination to tie any budget measure to defunding the Affordable Care Act, the major provisions of which went into effect Tuesday.

On Monday, President Obama warned about the consequences of a federal shutdown.

“With regard to operations that will continue: If you’re on Social Security, you will keep receiving your checks. If you’re on Medicare, your doctor will still see you. Everyone’s mail will still be delivered. And government operations related to national security or public safety will go on. Our troops will continue to serve with skill, honor, and courage. Air traffic controllers, prison guards, those who are with border control — our Border Patrol will remain on their posts, but their paychecks will be delayed until the government reopens. NASA will shut down almost entirely, but Mission Control will remain open to support the astronauts serving on the Space Station.”

Obama added, “I also want to be very clear about what would change. Office buildings would close. Paychecks would be delayed. Vital services that seniors and veterans, women and children, businesses and our economy depend on would be hamstrung. Business owners would see delays in raising capital, seeking infrastructure permits, or rebuilding after Hurricane Sandy. Veterans who’ve sacrificed for their country will find their support centers unstaffed. Tourists will find every one of America’s national parks and monuments, from Yosemite to the Smithsonian to the Statue of Liberty, immediately closed. And of course, the communities and small businesses that rely on these national treasures for their livelihoods will be out of customers and out of luck.

“And in keeping with the broad ramifications of a shutdown, I think it’s important that everybody understand the federal government is America’s largest employer. More than 2 million civilian workers and 1.4 million active-duty military serve in all 50 states and all around the world. In the event of a government shutdown, hundreds of thousands of these dedicated public servants who stay on the job will do so without pay — and several hundred thousand more will be immediately and indefinitely furloughed without pay.”

The shutdown could have dire consequences for our national security, according to a report by the Congressional Research Service.

According to the report, “Shutdown of the Federal Government: Causes, Processes, and Effects,” published Sept. 23: “A federal government shutdown could have possible negative security implications as some entities wishing to take actions harmful to U.S. interests may see the nation as physically and politically vulnerable,” the report stated.

If the past is any guide, the shutdown might be short-lived. The longest federal shutdown lasted 21 days, from Dec. 16, 1995 to Jan. 6, 1996. In the past, furloughed federal workers received retroactive pay for the time they were out. But there is no assurance that would happen this time. Members of Congress are exempt from furloughs.

There is also concern that the shutdown will be another setback for the already shaky economy.

Moddy’s Analytics estimates that a three to four week shutdown could cost the economy about $55 billion, about equal the combined economic disruption caused by Hurricane Katrina and Superstorm Sandy.

When the government was shutdown in fiscal year 1996, according to the Congressional Research Service report:

Health – New patients were not accepted into clinical research at the National
Institutes of Health (NIH) clinical center; the Centers for Disease Control and
Prevention ceased disease surveillance; and hotline calls to NIH concerning
diseases were not answered.

Law Enforcement and Public Safety – Delays occurred in the processing of
alcohol, tobacco, firearms, and explosives applications by the Bureau of Alcohol,
Tobacco, and Firearms; work on more than 3,500 bankruptcy cases reportedly
was suspended; cancellation of the recruitment and testing of federal law enforcement officials reportedly occurred, including the hiring of 400 border patrol agents; and delinquent child-support cases were delayed.

Parks, Museums, and Monuments. Closure of 368 National Park Service sites
(loss of 7 million visitors) reportedly occurred, with loss of tourism revenues to local
communities; and closure of national museums and monuments (reportedly with an estimated loss of 2 million visitors) occurred.

American Veterans – Multiple services were curtailed, ranging from health and
welfare to finance and travel.

Federal Contractors – Of $18 billion in Washington, D.C.-area contracts, $3.7
billion (more than 20 percent) reportedly were affected adversely by the funding
lapse; the National Institute of Standards and Technology (NIST) was unable to issue a new
standard for lights and lamps that was scheduled to be effective January 1, 1996,
possibly resulting in delayed product delivery and lost sales; and employees of federal contractors reportedly were furloughed without pay.

Speaking in the Rose Garden Tuesday, President Obama said: “I will not negotiate over Congress’s responsibility to pay bills it’s already racked up. I’m not going to allow anybody to drag the good name of the United States of America through the mud just to refight a settled election or extract ideological demands. Nobody gets to hurt our economy and millions of hardworking families over a law you don’t like.”

The Tea Party’s Revolt Against Reality